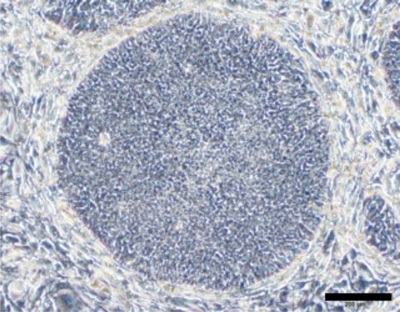 Colony of iPS cells made from Kawasaki disease patients.

Kawasaki Disease inflicts children by inflaming the arteries. The disease is for the most part manageable, but a small percentage of patients show resistance to standard treatment. "High-dose intravenous immunoglobulin [IVIG] is the standard treatment," said CiRA Professor Kenji Osafune, "but some patients do not respond." These non-responders are at higher risk of aneurysms. In Circulation Journal, the Osafune lab uses iPS cells to report molecular abnormalities that could explain the resistance.

The researchers created iPS cells from four patients, two who responded to IVIG and two who did not, and then prepared endothelial cells. "Kawasaki Disease is an immune disease that affects the vasculature. Previous studies have shown immune cells are not completely dysregulated, so we reasoned endothelial cells could also be the source," Osafune explained.

They did a gene analysis of the iPS cell-derived endothelial cells from these two groups along with those from healthy volunteers and found one candidate gene. "CXCL12 is a chemoattractant responsible for leukocyte migration," said Osafune. IVIG resistance is usually marked by a high number of leukocytes accumulating at the vasculature. Indeed, his team found that endothelial cells from non-responder iPS cells expressed abnormally high levels of the CXCL12 gene. CXCL12 is an essential molecule for the immune system, so its complete inhibition is unwise. "These results show that we need to modulate CXCL12 levels in IVIG-resistant patients," said Osafune.

There already exist drugs approved by the FDA that antagonize CXCL12. The lab is now considering whether the addition of this drug could make IVIG treatment effective for all Kawasaki Disease patients.