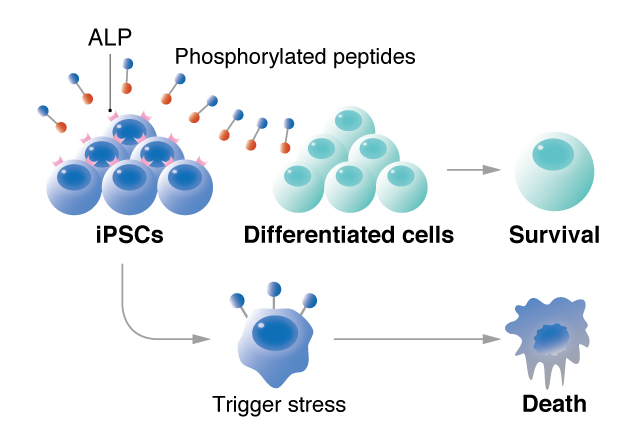 ALP stimulates peptides to gather only on stem cells, leaving these cells vulnerable to death.

CiRA researchers use peptides to separate cells from stem cells safely and cheaply.

One major challenge delaying the transition of stem cell therapies from the bench to the bedside is the homogeneity of the cell population. While stem cells are used as the cell source for the therapy, they are never directly injected into the patient because of their tumorigenicity. Therefore their removal before cells are transplanted to a patient is imperative. Professor Hirohide Saito and his team report that specifically designed peptides can be used to identify and remove stem cells from a heterogeneous cell population.

Several technologies exist for separating cells, but these may incur high financial cost and damage to the cells. "Effective purification methods are often expensive and time consuming. And the involvements of toxin or cell sorting techniques are damaging to the surviving cells, "says Saito."

Saito researches biotechnologies that control cell behavior. In several diseases like Alzheimer's, cells die because of aggregation of deviant protein folding. Saito wondered if technology from his lab could induce similar toxic aggregation on stem cells.

ALP are highly expressed in pluripotent stem cells such as iPS cells, but only are expressed at very low levels in most somatic cells types such as cardiomyocytes. Kuang hypothesized that exposing cells to peptides that aggregate after ALP exposure would be toxic only to iPS cells.

Indeed, Kuang found a peptide that can efficiently kill iPS cells within 2 hours but has little effect on somatic cells. They mixed iPS cells with cardiomyocytes and injected the mixture into mice. The recipient mice developed tumors unless the mixture was treated with an ALP-sensitive peptide prior to the transplantation, indicating that the peptide led to the elimination of the iPS cells prior to the transplantation.

Kuang remarked that the amount of necessary peptide to elicit this effect is higher than the amount of other biomolecules used to remove stem cells, but "the cost is low, the synthesis is easy, and most importantly we do not need to use cell sorting," a method commonly used to sort cells but also damages them.

Furthermore, the lethal effect of the peptide was stronger with much shorter exposure time compared to other biomolecules that kill iPS cells. "We want to minimize damage to the surviving cells," says Kuang.

The simplicity and cost of the new technology is expected to allow researchers like clinicians uncomfortable with complicated separation methods to pursue stem cell therapies.