CiRA researchers show human iPS cells model the segmentation clock, which patterns the spine and rib cage of man and other vertebrates. 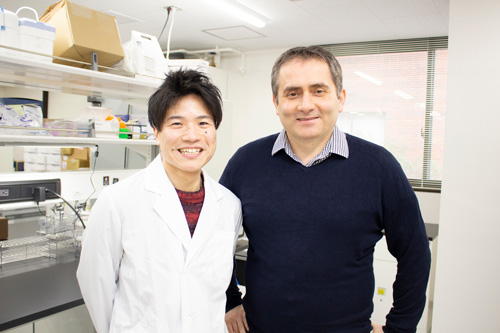 The ability to make any type of cell from stem cells has launched a multi-billion dollar industry that is expected to double in the next decade. Some differentiated cell types have proven much easier to produce than others, however. Perhaps surprisingly, scientists have had remarkable success manufacturing brain cells or eye cells from stem cells and are already implanting these cells into patients. Other cell types have proven more difficult to obtain, in part because of the complex spatiotemporal patterns that determine their formation in the embryo. One example is the segmentation clock, a biological oscillator that controls the formation and patterning of tissues such as the spine and rib cage. In a new report published in Nature, scientists at CiRA and several other Japanese institutes show that induced pluripotent stem (iPS) cells accurately recapitulate features of the human segmentation clock, providing both a new way to study complex patterning without using embryos and modeling related diseases while producing functional cell types.

Very early in development, the embryo partitions into three distinctive germ layers (ectoderm, endoderm, and mesoderm), and scientists can trace all cells in the body to these respective germ layers. Of the three, mesoderm contributes to and controls spatiotemporally the emergence of complex structures needed for other organs to form and function.

Dr. Cantas Alev, who led the study and has since moved from CiRA to the Institute for Advanced Study of Human Biology (ASHBi) in Kyoto, Japan, as an independent Associate Professor, describes the mesoderm as the "guiding germ layer. Each organ needs blood vessels and connective tissues. It needs structure. Mesoderm supplies such guiding cues for complex organogenesis."

The segmentation clock has been studied using model organisms including mouse, chick, and zebrafish. Although the period of the clock differs, the genes and signaling pathways involved are strikingly similar. However, capturing the segmentation clock without using embryos has proven difficult. By using human iPS cells and focusing on a developmental stage known as presomitic mesoderm, Alev and colleagues captured the human segmentation clock and have shown that it oscillates every five hours.

Yoshihiro Yamanaka, who conducted most of the experiments and will earn his Ph.D. from the study, notes that the iPS cells revealed some crucial distinctions of the human segmentation clock.

The findings also provided a unique opportunity to study diseases associated with a defective segmentation clock.

Spondylocostal dysostosis (SCD) is a genetic disease that leads to malformations of the spine and ribs. The research team derived iPS cells from healthy donors as well as spondylocostal dysostosis patients, which carry a specific mutation in a segmentation clock gene. Furthermore, in some of the iPS cells made from the healthy donors, they created mutations in genes related to the segmentation clock using CRISPR-Cas9 gene editing technology, while in some iPSCs made from the patient cells, the mutated genes were corrected. None of the iPS cells showed any aberrations when differentiated to presomitic mesoderm cells in a dish, but when looking at distinct features of the segmentation clock , they found abnormalities in the oscillation and synchronization of mutant cells, although the type and degree of the abnormality depended on the mutated gene.

Alev is excited about the wider implications of this study and is "hopeful that similar synthetic developmental approaches may address other complex embryonic developmental processes and diseases in the future."

However, as a developmental biologist, he sees the recapitulation of the segmentation clock as a critical step towards the ultimate goal of his new lab.

"The aim is to recreate complex organs and tissues from stem cells and by doing so increase our still limited understanding of human development and disease," he says.