Parkinson's disease is a progressive and intractable disease of the nervous system in which the loss of dopaminergic neurons in the brain leads to reduced dopamine production, resulting in limb tremor, stiffness causing difficulty in movement, and other symptoms. The therapies applied up till now, based on drugs or electrode treatment, may improve symptoms but have proved unable to halt the depletion of dopaminergic neurons. Hopes have therefore become focused on a therapy with the more radical approach of replacing the lost neural cells through cell transplantation, thereby promoting the formation of new neural pathways to restore brain function. Human iPS cells are looked to as a potential source of the transplant cells.


iPS cells prepared from four cynomolgus monkeys were differentiated into dopaminergic neural cells over a period of 28 days and transplanted into the monkeys' brains, which were observed over a period of approximately three months during which no immunosuppressants were used. The study data show that, in primates, autologous transplantation of iPS cell-derived neural cells produces almost no immune reaction and is superior to allogeneic transplantation in terms of immune reaction control and cell viability. 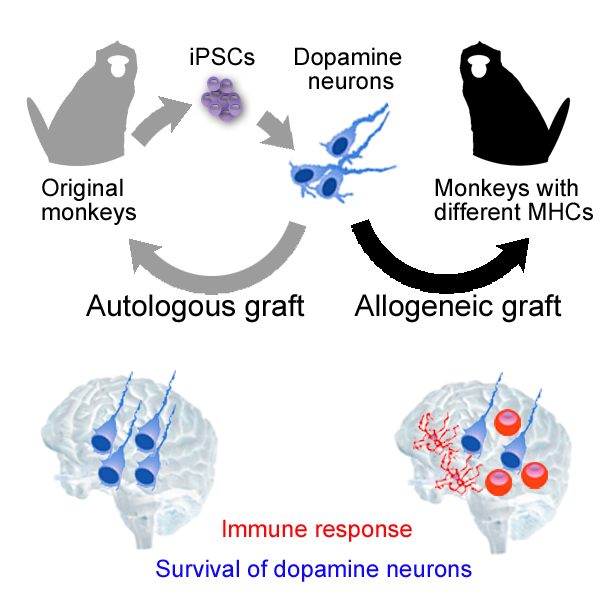