A CiRA research team has developed a method of producing human iPS cell-derived dopaminergic neural progenitor cells that brings closer the prospect of clinical application. The team, which carried out joint research with Osaka University and KAN Research Institute, Inc., included researcher Daisuke Doi and Professor Jun Takahashi, both members of CiRA's Department of Clinical Application. The findings of their research were published in the U.S. scientific journal Stem Cell Reports on March 6, 2014 at noon (U.S. Eastern time).


Parkinson's disease is an intractable and progressive disease of the nervous system in which depletion of the dopaminergic neurons, which project from the midbrain substantia nigra into the corpum striatum, leads to reduced levels of dopamine in the brain, causing limb tremor and stiffness and resulting in reduced mobility and other symptoms. The therapies applied up till now, based on drug treatment and electrode therapy, may relieve symptoms, but have proved unable to halt the depletion of dopaminergic neurons. The result is that it becomes increasingly difficult to lessen symptoms as the pathology progresses. Hopes have therefore become focused on a therapy with the more radical approach of replacing the lost dopaminergic neurons through cell transplantation, thereby promoting the formation of new neural pathways to restore brain function. Human iPS cells are looked to as one potential source of the transplant cells.


Previous reports had indicated that transplantation of dopaminergic neurons induced from human iPS cells can improve motor function in a rat model of Parkinson's disease. However, it was recognized that clinical application would require development of a large-scale culture method and the exclusion of cells that carry the risk of tumor formation. One of the characteristics of iPS cells is their high proliferative ability. The converse of this is that, when implanted in patients as a graft, there is a risk that a residue of cells with proliferative potential may cause tumors to form. Takahashi and his team had previously carried out experiments in which human ES cell-derived neurons were transplanted into primates. Their findings showed that large numbers of the ES cell-derived dopaminergic neurons became viable in the brain and produced improvement of neurological symptoms (Doi et al., Stem Cells, 2012). Although no surviving residue of human ES cells was observed in the study, immature neurons were found to have displayed slight proliferation. The other disadvantage of this earlier method was that the graft contained a mixture of various cell types, with a relatively low proportion of the dopaminergic neurons required for Parkinson's disease treatment.


Clinical application therefore demanded that cells with proliferative potential be excluded and the proportion of dopaminergic neurons increased. It also required a large number of cells, from 10 million to 100 million or more, which had to be cultured under conditions free of animal-derived substances. A new culture method therefore had to be developed. To resolve these issues, the team experimented with modified methods of inducing cell differentiation and the use of cell sorting by FACS (fluorescence-activated cell sorting) to screen the dopaminergic neural progenitor cells.


Under the newly developed method, which involves adhesion culture using synthetic laminin, recombinant laminin 511E8 fragments developed by the Osaka University Institute for Protein Research, cell culture at more than 20 times the previous concentration became possible, while screening and concentration of the dopaminergic neural progenitor cells was made possible by the use of cell sorting based on an anti-CORIN antibody developed by KAN Research Institute, Inc. When cells generated using this method were transplanted into the brain of a rat model of Parkinson's disease, motor function was improved without tumor formation, indicating that this is a safer and more efficient method of dopaminergic neuron transplantation.


In iPS cell-based cell transplantation therapy, the risk of tumors arising in the graft from residues of proliferative cells has been a problem. In the present study, cell sorting using the anti-CORIN antibodies allowed the researchers to exclude cells that presented a tumor risk and also increased the proportion of midbrain dopaminergic neurons in the graft, enabling safer and more efficient transplantation. Previously, iPS cell culture and neural induction required the use of mouse-derived feeder cells. Neural induction could be achieved using suspension cell culture, but this method was not suitable for large-scale culture. The use of the recombinant laminin 511E8 fragments in the present study, in place of mouse-derived feeder cells, has made possible the large-scale culture of cells that are suitable for clinical use. These improvements are significant for having allowed the establishment of a protocol that brings closer the prospect of clinical application.


In the present study, the rat model was observed for four months after transplantation before the protocol was established. Before commencing clinical application, the researchers plan to carry out transplantation to a primate model of cells prepared using this protocol, followed by a longer observation period to confirm safety and efficacy in greater detail. Meanwhile, it has been demonstrated that autologous transplantation of iPS cells-derived functional cells is possible, and investigation is now needed to test whether dopaminergic cells induced using iPS cells generated from Parkinson's disease patients can function within the brain. Once these issues have been dealt with, researchers will be in a position to proceed toward clinical application. 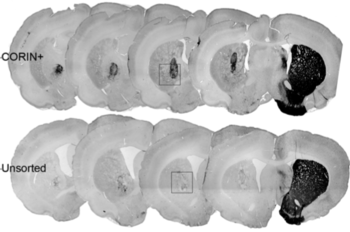