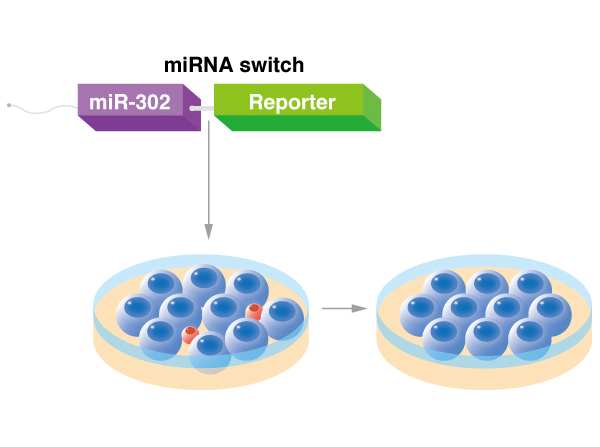 miR-302 switches can identify and remove even a tiny number of potentially cancerous cells (red) from a cell population for therapy.

Pluripotent stem cells (PSCs) allow scientists to create any number of cells of any types for regenerative medicine. However, the transformation is not 100%, resulting in residual PSCs and other undifferentiated cells. Because these residual cells proliferate, they risk creating tumors, which means they must be removed before the cell therapy is applied to the patient. Typically, removal involves the use of antibodies that bind to surface receptors on the PSCs. However, antibodies are not perfect at purifying the target cells. According to Professor Hirohide Saito of CiRA, "Alternative strategies for cell purification are important to facilitate some cell therapies."

For one strategy, the Saito lab is seeking unique signatures from inside the cell. "We are separating cells by micro RNA (miRNA), not surface receptors," explains Dr. Callum Parr, a researcher in the Saito laboratory and first author of a new study in Scientific Reports that describes miRNA-based technology.

In a previous publication, the group had reported miRNA switches, a biotechnology that turns a gene on or off depending on the miRNA found inside the cell. The body has thousands of miRNAs, but one in particular, miR-302, is especially associated with proliferation. "Undifferentiated cells specifically express miR-302 and as they differentiate they lose this expression," said Parr.