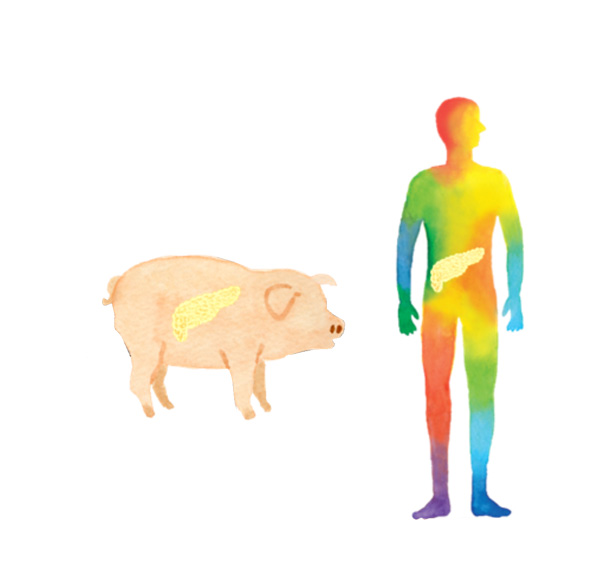 Tolerance for human organs grown in animals and using those organs for human transplants depends on how the research is explained.

Through stem research, the future will see human organs grown in animals, removing the need of human donors for transplantations. Already, rat organs are being grown in mice and vice versa, and there has been great progress in growing human pancreas in pigs. However, this field depends on more than just science. Its limits will also be decided by how much society permits. The Uehiro Research Division for iPS Cell Ethics at CiRA reports a new study that suggested the public's tolerance is high if properly informed about the purpose.

"Stem cell policies depend on a well informed public," says Dr. Tsutomu Sawai, who conducted the study. "We found that by explaining the different purposes of human-animal chimeras we could identify what the public will permit and what they won't permit."

The construction of human pancreas in pig depends on mixing human stem cells in pig embryos to produce a chimera. Additional manipulations to the embryo make it so that only the human stem cells contribute to the pancreas formation, while all other cells in the pig's body are the exclusive domain of pig cells.

A common concern expressed by the public hearing idea of human-animal chimeras is humanization of the animals. People are especially averse to the idea of human cells mixing with animal brain or germ cells.

To test the public's tolerance for human pancreas in pig, Sawai broke down the research into three categories.

"We asked if they would permit research to observe how human stem cells grow in pig embryo, how the pancreas develops, and if the pancreas can be used as transplants for patients," he explains.

Distributing a questionnaire, Sawai received responses from 520 ordinary citizens via the Internet and 105 researchers and research support staffers working at CiRA.

Overall, the non-scientists were less permissive of these experiments than the scientists, but still a strong majority (>60%) was open to growing human pancreas in pigs.

"Our results show that the general public is tolerant of research extending beyond currently allowed practices," Sawai says.

The results tended to show more tolerance than surveys taken previously. "I think the higher tolerance is because we specifically detailed the research objectives and clinical applications," adds Sawai.

He also found that among the respondents opposed to these experiments, their decisions were firm, saying, "Rejection was based on personal values. It is unlikely more scientific information would change their level of acceptance."

This point suggests that there will be a subpopulation of the public that will resist human-animal chimeras regardless of the information given. Convincing these people, "will be a challenge for policymakers and will require a different approach," concludes Sawai.