Home › News and Events › 2019 › Researches › iPS cells made from cells collected through the Tohoku Medical Megabank Project 〜 Cells from 150,000 cohort participants may be used for iPS cell research 〜

iPS cells made from cells collected through the Tohoku Medical Megabank Project 〜 Cells from 150,000 cohort participants may be used for iPS cell research 〜

The collaboration between CiRA and ToMMo began in 2016. ToMMo has collected cells from a cohort study*3 of a wide population for multiple health parameters. The reprogramming of the participants' cells into iPS cells from six of the cohort study participants was completed in October 2018. In 2013, ToMMo partnered with Iwate Tohoku Medical Megabank Organization (IMM), Iwate Medical University, together which conducted a cohort study of residents in the Iwate and Miyagi prefectures. More than 150,000 residents agreed to participate. The resulting TMM has collected peripheral blood mononuclear cells, plasma, serum and urine along with blood-derived DNA, making it one of the largest biobank in Japan. Ultimately, TMM plans to comprehensively analyze all its biological specimens but currently has completed analysis of the whole genomes of 5,000 participants and DNA microarray*4 of approximately 100,000 participants. CiRA, on the other hand, is preparing iPS cells from healthy and diseased donors. iPS cell can be differentiated into various types of cells in the human body, and Symptoms of diseases can be replicated in cells derived from patient iPS cells*5. Comparing the function of differentiated iPS cells between the two groups is expected to help clarify the pathogenesis of many diseases.

This collaborative research between ToMMo and CiRA makes it possible for researchers to prepare iPS cells from patients with specific diseases, from which they can identify the effects of genetic polymorphisms on cell function and disease development. A study like this is expected to accelerate personalized medicine*6 using iPS cells.

CiRA has prepared a total of 36 iPS cell lines*7 from the peripheral blood mononuclear cells deposited in the TMM. The cells are obtained from six participants who have had their whole genome analyzed.

To confirm the quality of the 36 lines, they were tested for cell colony*8 morphology, the expression of pluripotency markers*9, and residual plasmid vector*10 (fig. 1). Further, 12 lines were analyzed for tri-lineage differentiation*11 (fig. 2). The lines were all confirmed to have the ability to differentiate into the three germ layers (ectoderm, mesoderm and endoderm; fig. 3). 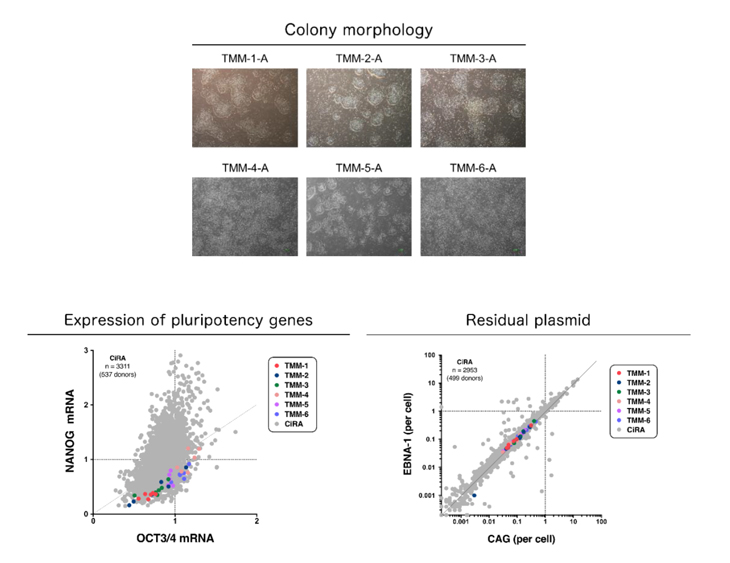 Top：Images of 6 iPS cell lines from 6 participants made from the reprogramming of peripheral blood mononuclear cells. All cells show normal morphology.

Bottom Left：Expression of the pluripotency markers NANOG and OCT3/4.

* Bottom Left and Bottom Right show that the iPS cell lines generated from TMM cells have similar morphology as iPS cell lines made at CiRA previously.

iPS cells are cultured in conditions that do not induce differentiation or induce ectoderm, mesoderm or endoderm lineages. Afterwards, the cells are analyzed with flow cytometry*12.

Because of the comprehensive data the TMM holds about its participants' cells, including medical history and genome, differentiating the resulting iPS cells is expected to provide important information about several cell types such as cardiomyocytes and neurons, and relationships between genotypes and phenotypes, such as genetic polymorphisms and disease. This information will further contribute to drug discovery and personalized medicine.

＜About the Tohoku Medical Megabank (TMM) Project＞
The TMM Project is designed to help with the recovery of the Tohoku region after the Great East Japan Earthquake in 2011 and to realize personalized prevention and medicine. The ToMMo and the IMM began a cohort study in 2013 of over 150,000 residents that spanned three generations and has built a biobank collecting biological specimens and information from them. Since 2015, the Japan Agency for Medical Research and Development (AMED) supports this project.


*1. Biobank:
Collects and stores biological specimens and provides them for research use. The TMM Project has mainly been acquiring blood and urine samples from participants in a cohort study.


*3. Cohort study：
A longitudinal survey that investigates the effect of environmental and genetic factors on diseases and other health related conditions in a specific population.


*5. Patient iPS cells：
iPS cells made from patient samples, thus sharing the same genome as the patient. These cells can be used to study disease mechanisms and screen drug compounds.


*6. Personalized medicine：
Drugs and other medical treatments that act on conditions specific to the patient, such as genetic background, physiological condition, etc. An example of personalized medicine is to select a drug that directly affects genes that cause the disease or that causes less side effects depending on the patient's genome information.


*7. Cell line：
A group of identical cells in a dish that grew infinitely from the division of a single cell.


*8. Cell colony：
A group of cells in a dish that grew from the division of a single parent cell or multiple parent cells.


*9. Pluripotency markers：
Genes that indicate a cell has not begun to differentiate. These markers are commonly used to identify ES and iPS cells.

*10. Plasmid vector：
A type of vector used to introduce a gene into a cell.


*11. Tri-lineage differentiation analysis：
An assay used to determine if ES cells and iPS cells have the potential to differentiate into the three germ layers (ectoderm, mesoderm, and endoderm), from which all adult cells are derived. Ectoderm forms neurons and skin cells, mesoderm shapes bones, heart muscles, and blood cells, and endoderm forms digestive organ and respiratory organ.


*12. Flow cytometry：
A device that flows cells in a liquid stream to analyze cell characteristics including whether cells express certain markers.