Sharpening writing skills is essential for science writers to cultivate lay people's curiosity about science. A science writer at CiRA took part in the 2018 Santa Fe Science Writing Workshop in May, together with 50 other participants who came from research institutes around the world to receive six-day writing training.

The workshop has been running for more than 20 years in Santa Fe, New Mexico, a small town with only 80,000 people. It was the creation of Sandra Blakeslee and George Johnson, two science writers who have written a number of books about science and contributed articles to major newspapers, including the New York Times.

Each year they bring together former colleagues from newspapers and magazines like NPR, the Wall Street Journal and Wired to mentor aspiring science writers. Joining the two this year were Henry Fountain, a climate reporter for the New York Times, Cornelia Dean, a science editor at the New York Times, and Robert Lee Hotz, a science journalist at the Wall Street Journal.

Although "science writing" is in the workshop's name, all the instructors came with a background in journalism and pushed this skill to the participants.

On the first day, participants attended lectures at the Santa Fe Institute and were asked by the instructors to make pitches about possible articles. The next three days were broken into morning lectures by the mentors on how they formulated highlighted science articles and afternoon group sessions where individuals discussed current writing assignments at their current employment. On the last day, individuals were invited to make pitches to the instructors.

An open seminar on this science writing workshop will be held at CiRA in July. Details will be announced later June. 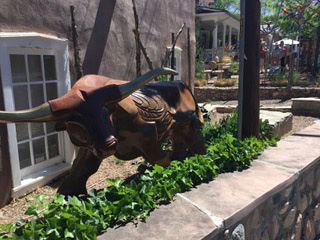 The culture in Santa Fe brings together an unusual proportion of artists and scientists.