The Hotta laboratory applies for the first time type I CRISPR-Cas3 gene editing to correct mutations in patient cells. 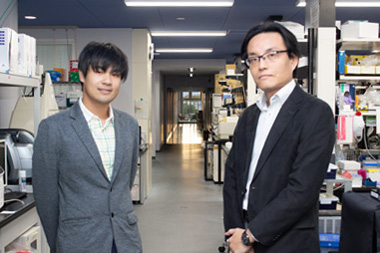 Gene editing technology has the potential to revolutionize medicine, because it allows scientists to precisely correct a deleterious mutation in a patient. The ability to harness the CRISPR-Cas system, a natural immune system found in bacteria and other simple organisms, in 2012, has led to an explosion of gene editing research, because of the relative simplicity of applying this system to human cells. However, most of this research has focused one type of CRISPR-Cas system. CiRA scientists, in collaboration with several Japanese universities, now report how a second and most common type of CRIPSR-Cas can be used to correct mutations found in the cells of Duchenne muscular dystrophy patients.

The type of CRISPR-Cas system is primarily defined by the Cas protein. Where the Cas9 system (Class II) is viewed as molecular scissors that precisely cut the DNA at one spot, the Cas3 system (Class I) can be thought of as a molecular shredder that tears a strip out of the DNA. Thus, the Cas9 system is useful for correcting single point mutations, that is mutations in which just one amino acid is mutated. Such mutations can have profound effects and are attributed to several diseases including cystic fibrosis and sickle-cell anemia. On the other hand, other mutations can wipe out large swaths of DNA, like that seen in Duchenne muscular dystrophy, which leaves patients unable to produce the protein dystrophin, leaving their muscles fragile and extremely vulnerable to injury.

"Class II systems have been shown to work on patient cells to correct disease mutations, but no one has shown class I systems do. The class I system is more abundant in nature, giving us more possibilities to engineer", says CiRA Junior Associate Professor Akitsu Hotta, who, with Professor Tomoji Mashimo at the University of Tokyo and Professor Junji Takeda at Osaka University, managed the project.

"Unlike the Class II Cas9, which works as a single protein component, the Class I Cas3 works as multiple protein components. The adaptation of the Cas3 system was not trivial, and that is a part of reason why no one have been able to demonstrate Cas3's genome editing activity in mammalian cells for a long time", says Dr. Yuya Okuzaki, a postdoctoral fellow in the Hotta lab and co-first author of the paper.

The paper shows how Okuzaki and colleagues optimized the expression of different Cas3 components to edit human iPS cells. It shows that Cas3 could induce a long stretch of DNA deletion, so the system is readily used to wipe off HLA molecules on the surface of iPS cells, which Hotta believes would expand the number of patients who could benefit from iPS cell therapies.

"By deleting HLA molecules, we can avoid the need for donor-patient matching. We have been exploring different classes of CRISPR-Cas with different Cas proteins for this purpose," he says.

Furthermore, the research group showed how the Cas3 system can be used to correct disease mutations by applying it to iPS cells from patients with Duchenne muscular dystrophy. They demonstrate that Cas3 is better suited to repair the Duchenne muscular dystrophy mutation by inducing exon skipping than Cas9. In exon skipping, certain small pieces of DNA (i.e., exons) are skipped over for the protein synthesis.

"Exon skipping leads to partially functional dystrophin and is undergoing clinical trials in the U.S.," he says.

This solution would not completely cure the patient, but it does result in a level of dystrophin that would be sufficient for a normal life.

In the case of gene editing, one of the major challenges is not only having the CRISPR-Cas system correct the mutated gene, but also assuring that it does not modify other parts of the DNA unintentionally. This risk appeared to be less with the Cas3 protein, because Cas3 recognizes longer stretches of DNA than Cas9.

"The function of type II systems in mammalian systems is well studied, but there is very little about type I systems. Applying Cas3 to Duchenne muscular dystrophy patient cells, we show type I systems could be used for new therapies," says Hotta.