CiRA obtains a patent in Europe 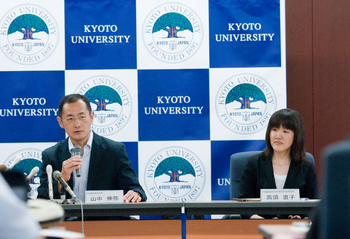 Kyoto University announced on July 11, 2011, that CiRA has obtained a new patent on the fundamental technique of generating induced pluripotent stem (iPS) cells in Europe, the first one in the region. The university owns three patent rights related to basic iPS cell technology in Japan, and two in Singapore, one in South Africa, and another one in the Eurasian region.

The patent covers the action of generating iPS cells by using the combinations of the reprogramming factors, regardless of the type of vectors used to introduce the factors into somatic cells.

As the patent describes the gene "family" the Myc family, for instance, includes both c-Myc and L-Myc, and other genes that have similar functions of Myc. Proteins and other gene products of the gene families are also in the scope of the patent right granted.

CiRA Director Shinya Yamanaka said, "I expect that industrialization of the iPS cell technology will accelerate overseas as we have obtained the patent on generating iPS cells which we applied in 2005 in Europe. We will make every effort to materialize clinical applications using iPS cells, and also try to obtain more iPS cell-related intellectual properties so that more firms can get involved in iPS cell research or commercialization of its technology with a sense of security."