New microRNA-based biotechnology can distinguish heterogeneities in cell populations at unprecedented precision. The ability to divide these cells should hasten cell therapies.

Two cell types, HeLa (purple) and MCF-7 (yellow), express two different miRNA (miR-24-3p and miR-203a) at similar levels that makes them nearly indistinguishable (left). However, these subtle differences are enough to separate the two cell populations using new biotechnology made at CiRA (right). FL1 and FL2 indicate fluorescence intensities of different fluorescent proteins. These images are from the published report. 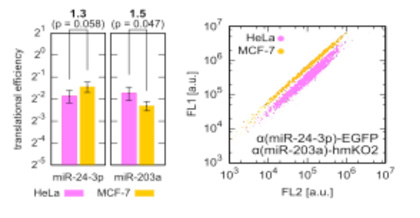 The ability to differentiate any cell type from pluripotent stem cells is one reason why iPS cells have become an attractive resource for cell therapies. However, during the differentiation process, the resulting cell population is frequently heterogeneous and includes undifferentiated stem cells as well as cells of different maturation states.

Professor Hirohide Saito at CiRA has accordingly been using micro RNA (miRNA) as the basis of new biotechnologies for this purpose. "miRNA can distinguish not only cell types but also cell states", Saito explains. The reason, he added, is that not only are different miRNA expressed in different cell types, but their expression levels change with cell development.

In the newest paper from his lab, Saito and his team report a method to distinguish cells that express miRNA at similar levels. The technique depends on synthetic mRNA that carries a fluorescent protein (FP) gene and a binding site for miRNA. In this system, even if the miRNA expression levels differ by less than 50% between cell types, the researchers show their technology can separate the cells based on the fluorescence ratio of the FP, giving extraordinary resolution. Using just two FP and two miRNA binding sites was enough to separate two different cell types, but increasing the number to three not only separated three cell types, it also separated different subgroups from one cell type. "Based on our calculations, three or four synthetic mRNAs can distinguish dozens or hundreds of cell types", said Saito.

Saito hopes that the potentially high purification achieved by this technique will expedite clinical therapies being planned at CiRA and also advance basic research. "We are working with a number of labs and happy to collaborate with more, he said.