Turbulence is good for the blood

CiRA researchers show that turbulence enhances the production of platelets. 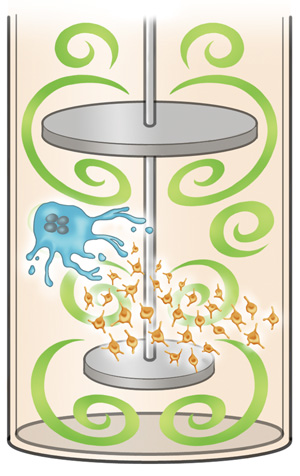 By incorporating turbulence (green) into the bioreactor, researchers can generate a large enough number of platelets (orange) from megakaryocytes (blue) for patient therapy.

Platelets are the cells that stop bleeding and are regularly needed to treat patients suffering from various diseases or undergoing surgery. In a new study seen in Cell, CiRA researchers show that turbulence can significantly increase platelet numbers. Using this new information, they report a bioreactor that produces enough platelets from iPS cells that may be able to replace donor blood and be used to treat patients.

Blood transfusions are the oldest form of cell therapy and have been done for centuries. However, the platelets taken from donors can only be stored for a several days, which is why organizations like the Red Cross hold regular blood drives. While this approach is the global standard, with the number of aging populations increasing, some nations, especially developed countries, are anticipating severe blood donor shortage. In fact, the Japan Ministry of Health, Labour and Welfare estimates that blood donor supplies will serve only four of every five patients in the next decade.

CiRA Professor Koji Eto, also appointed as Professor of Chiba University School of Medicine, has been developing platelets using iPS cell technology as a way to replace this complete dependency on donors. Platelets are extremely small fragments that blood flow breaks off the surface of much larger cells, megakaryocytes, much like washing debris off a car. Megakaryocytes are extremely rare in the body, but Eto's team of scientists have made an almost unlimited supply of megakaryocytes from iPS cells.

To produce platelets from megakaryocytes, engineers have constructed bioreactors that recapitulate blood flow. However, for regular patient care, more than 100 billion-order platelets are needed, and no bioreactor comes close to producing this amount.

"There has been lots of work on bioreactors, but they only used laminar flow. Nobody thought about turbulence," said Eto.

Bioreactors that incorporate laminar flow led to a great leap in the number of platelets produced from iPS cells, but still short of the number required for patient therapy. To reach that number, the latest study shows turbulence in addition to laminar flow is key.

To generate turbulence, Eto's team designed a new bioreactor that behaves like a French Press coffee maker, pushing the flow up and down.

The significance of turbulence was an unexpected finding, since too much turbulence can disrupt blood flow and ultimately be deadly. Eto explained that the turbulence in platelet generation only occurs immediately around the megakaryocytes.

Further study revealed that the turbulence stimulates three mediators: macrophage migration inhibitory factor, insulin growth factor binding protein 2, and nardilysin, all of which were previously unknown to have a crucial role in platelet generation.

Dr. Naoshi Sugimoto, a hematologist and member of the lab who contributed to the study said, "we can use the mediators to make a specialized culture" to improve the performance of the bioreactor even more.

Finally, the platelets were found to behave normally in mouse and rabbits, an important final step before conducting clinical studies on humans.

"Our goal is to produce platelets in the lab to replace human donors," said Eto.