The Hirohide Saito lab reports five orthogonal translational switches that operate at high efficiency and independently of one another in human cells. 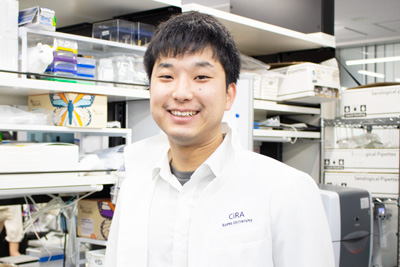 One of the goals of synthetic biology is to control the behavior of a cell. For example, this could be forcing cancer cells to die or immune cells to respond to a viral infection. The Hirohide Saito laboratory is developing RNA technology called the RNA switch for this purpose. To expand the synthetic biology application of RNA switches, more are needed without interfering with one another's performance. In the laboratory's latest work seen in ACS Synthetic Biology, Saito's team reports new RNA switches and show how together these switches can modulate gene expressions at post-transcriptional levels in human cells.

The RNA switch describes a synthetic RNA molecule that responds to a trigger protein. Binding to this protein causes the messenger RNA molecule to conform its shape, thus suppressing translation. Saito's team has previously shown how this strategy can control cell fate by making the trigger protein one associated with the cell state and the gene one associated with programmed cell death.

A major attraction of RNA switches is that they provide safer methods to program cells, because they can be delivered as synthetic RNAs. However, when forcing the cells to perform more complicated behavior, multiple RNA switches with distinct trigger proteins are required.

"To design more complex circuits by using many RNA switches, we had two problems to overcome," he continued. "One was to enhance the efficiency of the repression. Our RNA switch sometimes failed to repress translation when the target protein was present. Two was orthogonality. We need the RNA switches to operate without interference."

The solution to the first problem came by adding RNA scaffolds to the switch. This feature enhanced the translational repression when the switch was bound to the trigger protein.

As for the second problem, Ono observed that careful selection of the RNA switches is paramount.

"We selected five switches that had high efficiency and orthogonality. These switches can be used to construct post-transcriptional circuits in mammalian cells. But I want to increase the repertoire of RNA switches in the future, because I hope to expand our ability to control cells." he says.