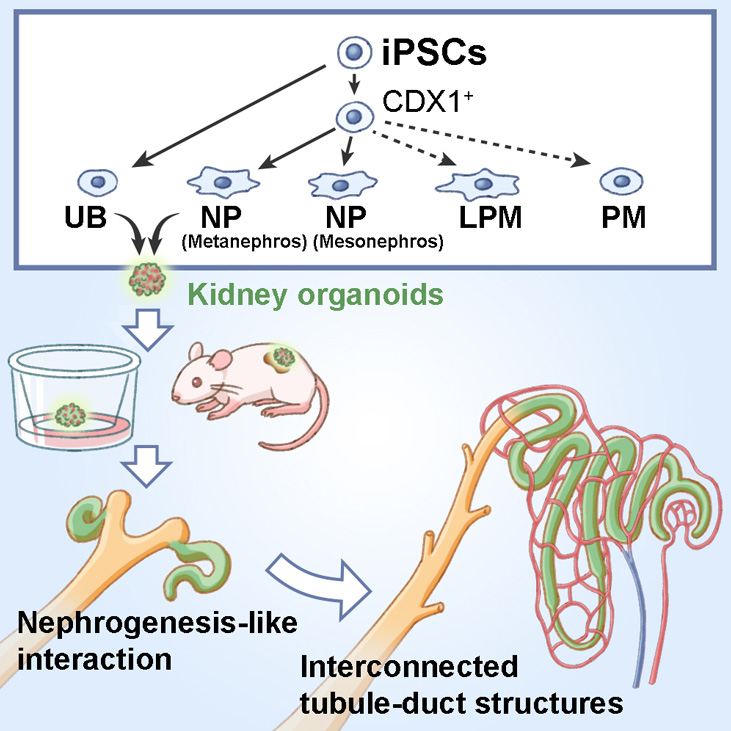 The Osafune laboratory reports a single system to produce most cells in kidney development from iPS cells, promising to lower the costs for studying kidney disease and treatment.

The kidney is a complicated organ that undergoes multiple stages of development. While scientists have had success recreating these stages from stem cells, doing so in just one system has proven more challenging. A new study led by CiRA Professor Kenji Osafune reports such a system with which, he says, they write a new developmental "roadmap" from human stem cells to a functional embryonic kidney. This roadmap is expected to help produce kidney cells for regenerative medicine.

Without kidney transplantation, chronic kidney disease leaves its patients with a lifetime dependency on dialysis. This has tremendous cost both in terms of economy and health, as more than 10% of the U.S. population suffers from some forms of chronic kidney disease, and the rates of dialysis are even higher in several Asian countries including Japan. Congenital kidney disease is even worse, leaving patients from birth in need of regular dialysis or renal replacement therapy. This situation has placed a priority on understanding how the kidneys develop.

Recreating the development of a functional kidney from stem cells requires the generation of several fundamental precursor cell types. Scientists have had success making most but have relied on different systems adding cost to the production.

The roadmap makes clear how to acquire these three cell types from human iPS cells. The cells self-organized into kidney organoids when mixed together in a manner consistent with that seen naturally in embryonic kidney. Transplantation of the resulting kidney organoids into mice resulted in good engraftment, with blood vessels from the mice feeding the organoids.

"This was an expected finding," says Osafune. "We are still studying the reason."

By recapitulating most cell types and their interactions in kidney development, the researchers hope for their single system to benefit the study of kidney disease and therapies by simplifying experiments and lowering cost.