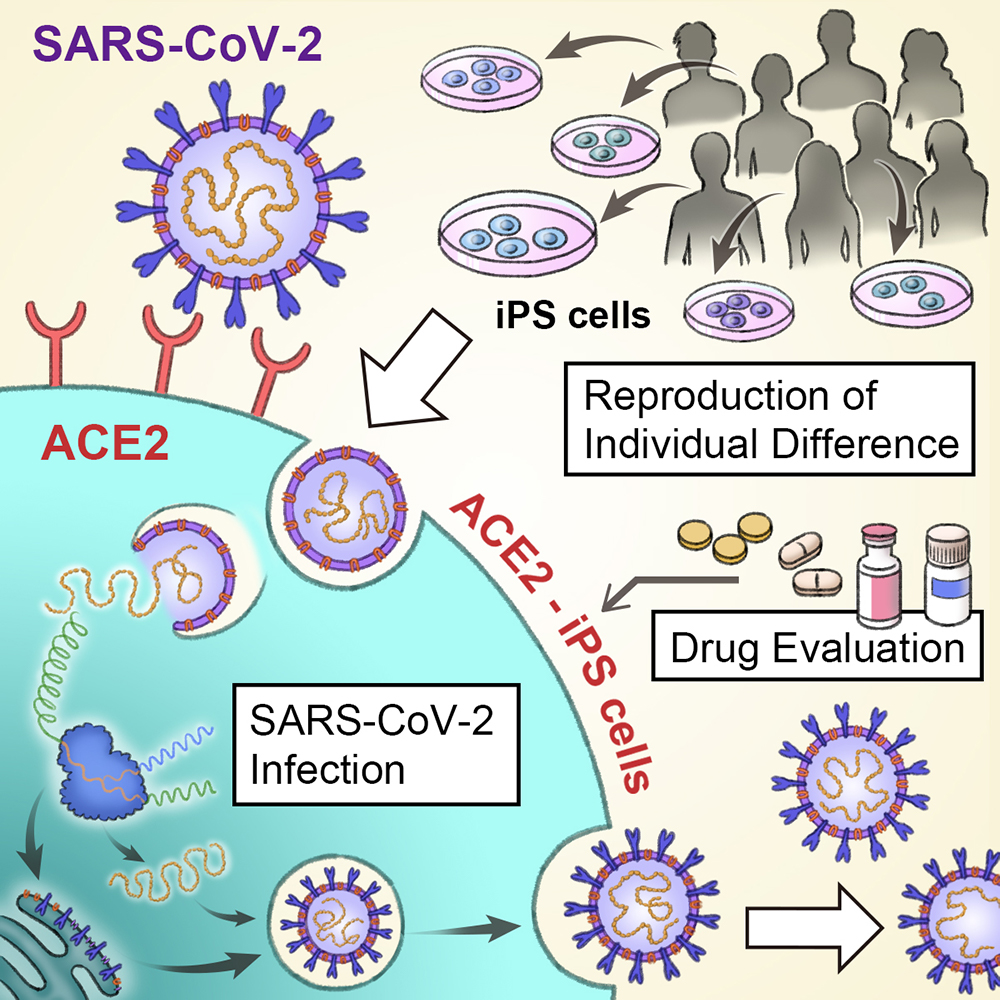 The Kazuo Takayama lab shows how iPS cells can be used to study SARS-CoV-2 and COVID-19.

With more than 125 million people infected and nearly 3 million dead, the COVID-19 pandemic has disrupted the world in inconceivable ways. Adding to the challenge is that the patient condition varies widely, from the asymptomatic to respiratory failure and death. A new study by CiRA researchers shows how iPS cells can be used to study infection by the severe acute respiratory syndrome coronavirus-2 (SARS-CoV-2), revealing gender differences seen with the disease.

One of the devasting aspects of COVID-19 is its unpredictable nature. An unknown number of people infected are asymptomatic, and those that do show symptoms range widely, from mild to severe.

"Age, comorbidities, and genetic factors are all attributed to the different severities. One major hurdle to treatment is predicting the patient's condition upon infection," explained Junior Associate Professor Kazuo Takayama, who led the study.

COVID-19 is the result of cells being infected by SARS-CoV-2. A global scientific effort has shown that the virus enters human cells through an enzyme known as angiotensin-converting enzyme 2 (ACE2). This enzyme is naturally found on many cell types, including those in organs most sensitive to the disease, namely the lungs.

Takayama is part of a larger group at CiRA that has been using iPS cells to study COVID-19. While lung cells are susceptible to infection due to their high expression of ACE2, the same is not true of iPS cells, which expression ACE2 less.

Therefore, his research team modified the expression of ACE2 on iPS cells to enable higher infection rates. Interestingly, even though the amount of ACE2 was about the same, SARS-CoV-2 had a propensity to infect cells from male donors than female donors.

"We're not sure what this means besides there being some gender risk with the disease, something that we have seen in the general population," said researcher Emi Sano, the first author of the study.

"We noticed that male cells tended to express more TMPRSS2 [transmembrane protease, serine 2]. This enzyme too has been identified as a mechanism for SARS-2 infection," she continued.

Finding that ACE2 increased the infection risk, the scientists then examined whether eight drugs under consideration for COVID-19 treatment could block the infection.

Among them, Remdesivir, which is undergoing clinical trials, was best at preventing the virus from entering iPS cells. On the other hand, Chloroquine, an anti-malaria drug, showed no positive effect.

Two other drugs that had positive effects, Camostat and Nafamostat, are known to inhibit TMPRSS2.

"One of our goals at CiRA is to show that iPS cells can be used search for drug candidates. This is an important proof of concept," said Takayama.