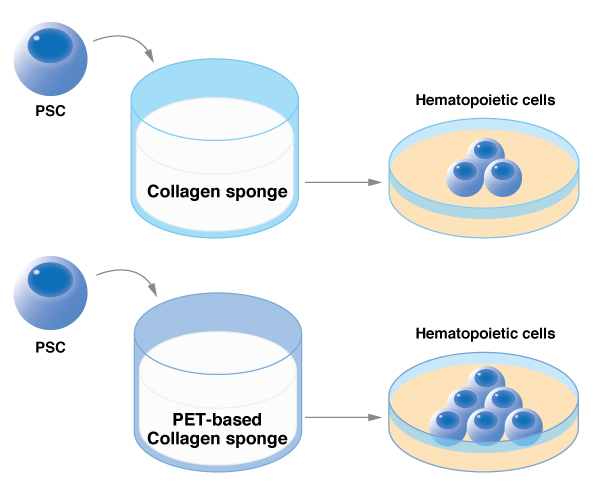 The creation of blood in the lab for clinical purposes depends on collaboration between not only cell biologists, but also materials scientists. Sometimes these collaborations can occur without the two parties even realizing it. That happened with Dr. Yoshinori Sugimine and Dr. Akira Niwa at the Megumu Saito lab in CiRA, who had been looking for biomaterials specific for the culturing of blood cells. "We found an appropriate collagen sponge and learned it was from Dr. Tabata," Niwa said, referring to Professor Yasuhiko Tabata, an expert on biomaterials at Kyoto University. The Saito lab was well familiar with Tabata's work and contacted him about a joint project using his collagen sponges for the preparation of blood cells from pluripotent stem cells.

Collagen sponges are commonly used to transition from 2D cultures to 3D cultures for cell preparations, because in the former case "it is difficult to use whole culture microenvironment as en bloc grafts for further applications," explains Niwa. Typically, collagen sponges are constituted of collagen fibers, but these fibers are susceptible to degradation by the chemicals used to differentiate stem cells to hematopoietic cells. Tabata's innovation replaces the collagen fibers with fibers made of poly(ethylene terephthalate) (PET), which is robust to the chemicals and allows for longer culture times, which in turn outputs a higher number of hematopoietic cells.

The report, which can be read in International Journal of Hematology, shows that 12 collagen sponges is enough to prepare millions of hematopoietic cells. While promising, these results are still only preliminary. Said Niwa, "It is our goal to establish a method to induce hematopoietic stem cells that can long survive in vivo." Accordingly, the next step is to study how well the resulting hematopoietic cells function in animal models.