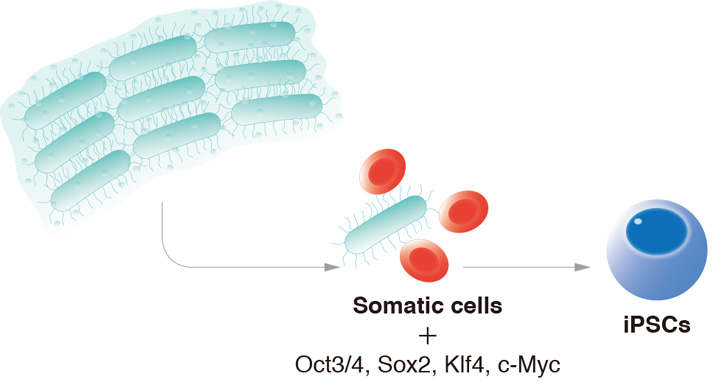 Scientists at CiRA show proteins from bacteria can be used to reprogram mouse cells. The discovery shows a new strategy for the field of cell reprogramming and how xenoproteins can be used to control cell identities.

The discovery of iPS cells demonstrated that a cell's identity could be change through the activation and repression of certain genes. While it is now possible to reprogram cells from one identity to another, the low efficiency limits the number of experiments and medical applications. A new study by CiRA researchers reports that using proteins from bacteria can enhance the reprogramming efficiency, giving light to how xenoproteins can regulate cell behavior.

CiRA Junior Associate Professor Shinji Masui, who led the study, notes that a number of chemical compounds have been found to improve reprogramming efficiency, but efficiency remains dissatisfactory, and finding new ones is not trivial.

"Several small molecules are known to enhance reprogramming, but the search is laborious. Bacterial proteins are easier to screen and prepare," he said.

According to Masui, scientists must screen tens of thousands of small molecules to find one candidate, whereas they need only screen tens of bacterial proteins.

Cell reprogramming to iPS cells was first demonstrated by transducing into mouse cells the four Yamanaka factors. In the new study, Masui and his colleagues tested 30 genes from the bacterium Wolbachia pipientis and found that introducing the protein coded from one of these genes with the Yamanaka factors into mouse cells changed the reprogramming efficiency. However, the effect depended on the cell type, as both mouse fibroblasts and mouse neural progenitor cells could be reprogrammed more efficiently, but mouse hepatoblasts became more resistant to reprogramming when the bacterial protein was added.

Masui admits that the dependency on cell deserves more study. Further analysis showed that the protein enhanced reprogramming by repressing genes that sustain cell identity, suggesting perhaps it may have to do with how xenoproteins interact with specific genes in the cell that accelerate the reprogramming.

The discovery that xenoproteins bind to cytoskeletal proteins suggests other methods that suppress these proteins could also benefit cell reprogramming science.

Masui is equally excited about the implications of bacteria influencing cell identity.

"Infections and diseases change cell behavior. The cell changes its identity. Understanding bacterial and mammalian cell interactions will allow us to understand disease development," he said.