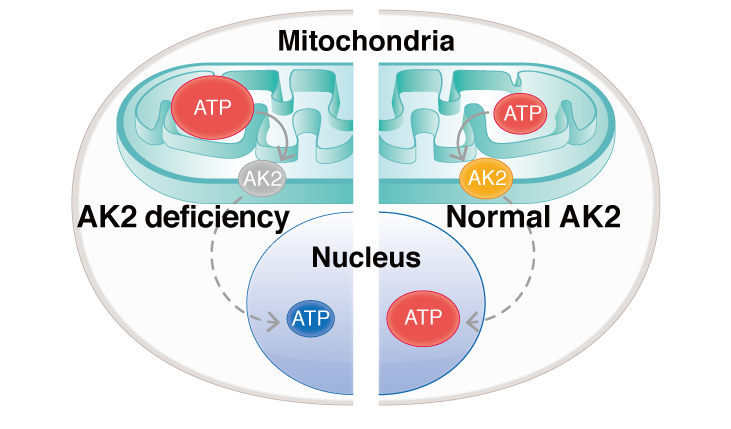 Using iPS cells from patients with reticular reticular dysgenesis, CiRA researchers find the causative mutation leads to an imbalance in ATP levels between mitochondria and the nucleus.

Japanese researchers use iPS cell technology to show why patients with reticular dysgenesis have a depleted immune system. Mutations in the enzyme adenylate kinase 2 of patient iPS cells were associated with a defective distribution of ATP in cells. As a result, patient iPS cells showed a depressed expression of genes responsible for immune cell differentiation, and thus a severely low count of immune cells.

Reticular dysgenesis is considered the most extreme form of severe combined immunodeficiency (or "bubble boy" disease). It is a hereditary disease, and patients will die shortly after birth if untreated. A number of ailments will inflict the patient, but all are attributed to compromised immune function.

Mutations in adenylate kinase 2 are responsible for reticular dysgenesis. All adenylate kinases are responsible for balancing the levels of ATP, ADP and AMP in the cell, making these kinases a gatekeeper of energy levels. Proper energy levels are crucial for the development of blood and immune cells from hematopoietic stem cells, notes CiRA Associate Professor and Pediatrician Megumu Saito.

"The transition of the metabolic status is linked to the fate of hematopoietic stem cells. It has been hypothesized that the adenylate kinase 2 mutation in reticular dysgenesis impairs the differentiation, but this is only a hypothesis," he said.

To test this hypothesis, Saito and his team of researchers prepared iPS cells from reticular dysgenesis patients and healthy controls and then differentiated the cells to hematopoietic lineage. The scientists found that the patient iPS cells were defective in their differentiation capacity to immune cells.

More specifically, the development was compromised at the stage of hemoangiogenic progenitor cells, which represent one of the earliest stages in blood development and are responsible for producing both endothelial cells and hematopoietic cells. The result was a severe inability of these cells to differentiate into immune cells. Further analysis found the cause to be deviations in the ATP distribution in the cells.

"There was much more ATP in the mitochondria of patient cells and much less in the nuclei. There was also a large difference in the genes expressed between patient and normal cells," explained Saito. Many of the genes poorly expressed by the differentiated patient iPS cells were related to blood development.

Besides giving clarity to a devastating disease, the findings also show key molecular events that must happen for proper development to occur.

"Our data suggest that the intracellular redistribution of ATP is important for controlling the cell fate," said Saito.