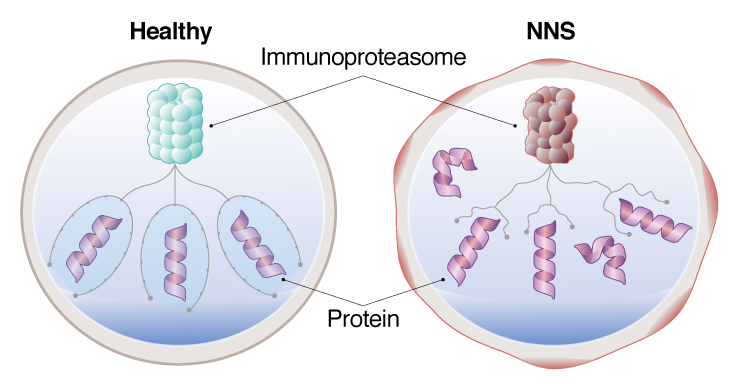 CiRA researchers report a new iPS cell model that recapitulates the cellular profile of patients with Nakajo-Nishimura Syndrome (NNS). Using this model, they report in Stem Cell Reports a molecular mechanism for the disease and also apply a drug screening method to find candidate compounds for new treatment.

NNS is an incredibly rare disease, with only 30 cases reported and all in Japan. It is caused by a mutation in the PSMB8 gene, which causes dysfunction in the immunoproteasome. Patients show symptoms by infancy or early childhood, mostly through fever and other inflammation, but will eventually develop dystrophy in the muscles and fat that emaciates them away.

Work at CiRA has already led to clinical trials for drugs on other orphan diseases such as fibrodysplasia ossificans progressiva. Pediatrician and CiRA Associate Professor Megumu Saito hopes to do the same for NNS.

"Corticosteroids are ineffective on lipodystrophy, and most patients die as a result of respiratory or cardiac failure. Because there are few patients, it is hard to build good models. We are making iPS cells and differentiating them into the disease cells," he said. Combining drug screening with the differentiated iPS cells, Saito hopes to find drugs that can cure NNS patients.

Because CiRA is a hub for iPS cell research, Saito's lab had access to 3 NNS patients from whom it prepared iPS cells. To compare the effects of the mutation, the lab also prepared isogenic patient iPS cells by genome editing to, as Saito explained, "precisely evaluate the effects of the PSMB8 mutation in iPSC-derived differentiated cells."

The PSMB8 mutation in NNS causes dysfunction in the immunoproteasome. The immunoproteasome is responsible for degrading proteins. Saito found, however, that the immunoproteasome in monocytes derived from patient iPS cells showed constitutively low activity, which could explain the autoimmune symptoms seen in patients. The accumulation of unwanted proteins caused stress on the cells, triggering an immune reaction and leaving the cells in what Saito calls a "primed state."

The excess ROS in the cell was found to activate signaling pathways involving MAPK and JAK/STAT, which are associated with the secretion of proinflammatory factors. Encouragingly, applying antioxidant therapy to the monocytes could ameliorate this proinflammatory effect.

One reason current treatments fail to ameliorate the lipodystrophy in NNS is the lack of good disease models. Saito is excited that having confirmed that this iPS cell model recapitulates the disease symptoms in monocytes, the same iPS cells could be used to produce other inflicted cell types, such as muscle and fat cells, for new drugs to treat NNS.

"Progressive lipomuscular atrophy is an important phenotype that affects the quality of life of NNS patients," he said. "We plan to use our iPS cells to screen for compounds that can treat these symptoms."