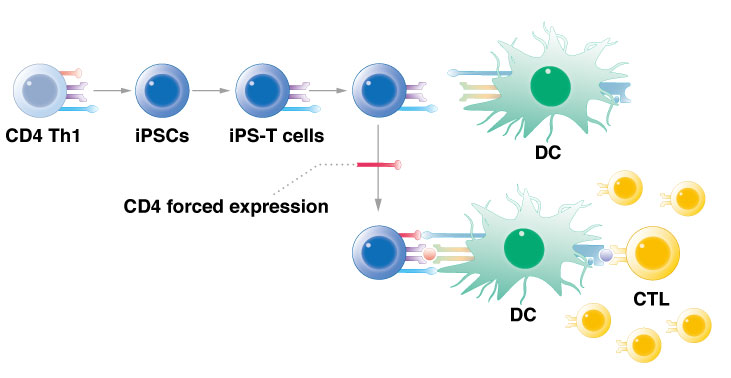 CiRA researchers show that reprogramming T cells and then forcing the expression of the CD4 gene activates immune cells to attack cancer.

Researchers at CiRA have used iPS cell technology to create an artificial type of immune cell that acts against cancer cells. The artificial cells have properties of innate lymphoid cells, a type of immune cell that reacts quickly to infection or injury. By activating a single gene, CD4, the innate lymphoid cells can be converted into what the researchers call "T helper-like cells." The new study, which can be read in Stem Cell Reports, shows the potential of these cells in cancer immunotherapy against leukemia.

The immune system is designed to detect and kill cancer cells by recognizing signature peptides on the cancer cell surface. However, cancer has evolved to evade immune cells. In response, cancer researchers are looking for ways that strengthen the detection capability.

According to CiRA Associate Professor Shin Kaneko, among the many types of immune cells, "CD4 T helper cells are effective at preventing the escape of immune surveillance by inducing a polyclonal immune response called antigen spreading." Antigen spreading expands the types of peptides on the cancer cell to which the immune cells recognize.

Cancer cells thrive when the immune system functions sub-optimally. In previous works, Kaneko's research team demonstrated that by using iPS cell reprogramming technology, they could "rejuvenate" cytotoxic T lymphocytes so that they more effectively kill the cancer. In the present study, he expanded this strategy to work on cells responsible for cancer detection, namely, T helper cells.

The rejuvenation of immune cells involves reprogramming them into iPS cells and then turning them back to their original form. In the new study, his team rejuvenated CD4 T helper cells that respond to a leukemia peptide, b3a2. However, unlike his previous work with cytotoxic T lymphocytes, differentiation of the iPS cells unexpectedly produced cells more akin to innate lymphoid cells, not rejuvenated CD4 T helper cells.

"That wasn't our goal. Innate lymphoid cells are a new type of cell. They don't have antigen specificity and have very general helper function," said Kaneko. In addition, they have a short lifespan and are localized, whereas CD4 helper T cells have a long lifespan and operate throughout the body.

However, his team showed that manipulating these innate lymphoid cells could convert them to take CD4 T helper cell activity.

While Kaneko calls his cells "very artificial," he believes they are just another example of how iPS cell reprogramming technology could be used to fight cancer.

"It is a way to give antigen specificity to innate lymphoid cells," he said.