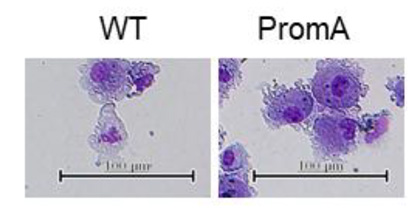 Transcription gene silencing for HIV in macrophages (photo) prevent the virus from spreading.

For the past two decades, better education has consistently dropped annual HIV infection rates, while better treatment has consistently extended the live span of infected patients. However, current treatment does not clear the virus, and patients must undergo regular antiviral therapy to keep the virus dormant. Using iPS cell technology, scientists at CiRA report a new treatment strategy based on transcription gene silencing that can halt HIV replication in infected cells without regular treatment.

As a retrovirus, HIV is made of RNA, but it tricks an infected cell to convert the RNA into DNA, which then incorporate into the cell's own DNA. Thus, as the cell expresses its DNA, it also expresses HIV DNA. CiRA Associate Professor Shin Kaneko, who led the study, has been investigating molecules that can be used to stop this expression.

Short hairpin RNA (shRNA) are found in all cells. Their function is to change the structure of DNA or RNA, thus preventing expression of the gene. By transfecting shRNA that bind to HIV DNA, Kaneko and his research team could prevent HIV expression in infected cells without affecting the expression of other genes.

"We transfected iPS cells with shRNA for the HIV promoter and differentiated them to macrophages. HIV DNA was present in the macrophages, but HIV did not replicate," he says.

Macrophages are one of two types of immune cells that HIV infects. By transfecting iPS cells and not macrophages directly, the scientists could take advantage of the high proliferation rate of iPS cells to make a large number of transfected macrophages for observation.

Unlike those macrophages, macrophages made from infected iPS cells that did not receive the shRNA transfection acted like HIV factories, allowing the virus to replicate and thrive.

Further study revealed how the HIV DNA was modified.

"There was an enrichment of H3K27me3 and failure of enrichment of H3K9Ac," says Kaneko, describing changes in the methylation and acetylation of the DNA, two common modifications that a cell naturally uses to regulate whether a gene is expressed.

Importantly, the shRNA did not bind to other DNA, assuring that only the HIV DNA was not expressed, suggesting macrophage function was unaffected.