Mutant pancreatic cells will not die 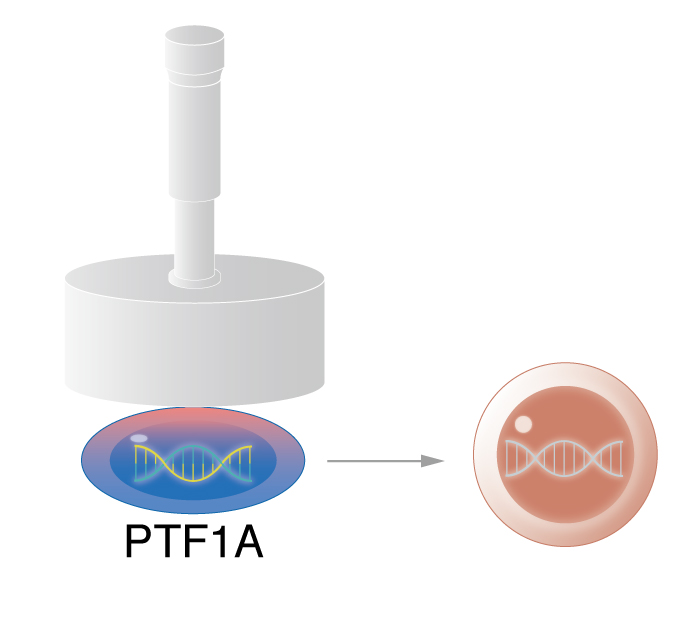 Acinar cells that fail to express PTF1A and under stress, tend to show a different cell identity, suggesting a possible route to becoming cancerous.

Pancreatic cancer is the deadliest of cancers, and there has been hardly any change in survival rates in the past 40 years. In many cases, patients have a mutated cancer gene. However, it is known that cell stress in combination with the mutated cancer gene increases the risk, at least in mice. In a new study in Scientific Reports, CiRA scientists show how the loss of one gene, Ptf1a, in mice triggers cell stress, leading to potentially cancerous changes in the pancreas.

The pancreas is an unusual organ in that can be viewed as two glands mixed into one. The exocrine pancreas secretes enzymes for digestion, while the endocrine pancreas releases hormones like insulin. Although these two functions are distinct, the genes responsible for growing the pancreas must assure both systems operate normally.

The importance of this gene has been mostly studied during the development of the pancreas. However, PTF1A also exists in adults, well after the pancreas has formed.

These observations have mostly come from heterozygous mice, that is, mice in which one of the two Ptf1a alleles is knocked out. A mouse in which the gene is knocked out of both alleles would have valuable new information about PTF1A function in adult cells.

"A homozygous mutant allows us to investigate more extreme effects of PTF1A," says Dr. Morito Sakikubo, the first author of the study and also a pancreatic surgeon.

Unsurprisingly, the loss of PTF1A resulted in these mice having smaller pancreas due to apoptosis, or programmed cell death.

Unfolded and misfolded proteins trigger an unfolded protein response that involves the molecules ATF4 and ATF6. These molecules correct the folded protein to relieve the cell of endoplasmic reticulum stress, but if active too long, they indicate to the cell that the stress is too great to overcome, and the cell activates CHOP, a molecule that signals apoptosis.

Many stressed cells, though, can escape apoptosis by changing their identity, a process known as metaplasia. These cells risk becoming cancerous.

Kawaguchi notes that the defective apoptosis seen in the homozygous mouse mutants could clarify the relationship between PTF1A and pancreatic cancer.

"Apoptosis is a healthy process through which the body kills off stressed cells. Cells that escape apoptosis can become cancerous upon the oncogenic gene mutations. Understanding the molecular pathways responsible should lead to better prevention and treatments," he says.