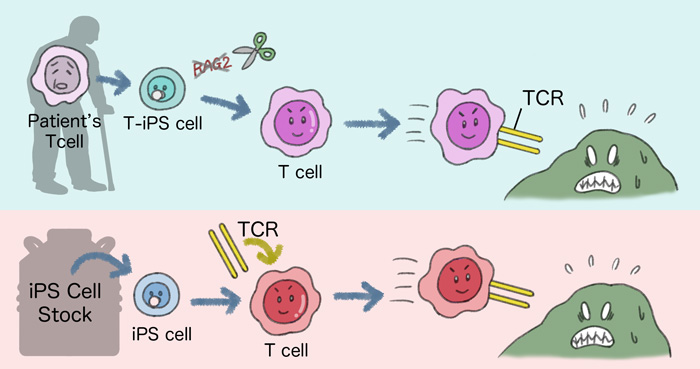 Two approaches using iPS cell technology were used for cancer immunotherapies. In the first, T cells from the patient are reprogrammed into iPS cells and have the gene RAG2 edited. These cells are then differentiated into T cells. In the second, iPS cells from a stock are modified to express specific TCRs when differentiated into T cells. In both cases, the resulting T cells show promising effects against cancers.

A key determinant of successful immunotherapies is immune cells targeting the pathology with high specificity. CiRA scientists are using iPS cell technology to make a large batch of immune cells for immunotherapies. However, retaining the antigen specificity remains a challenge. A new study by the CiRA Associate Professor Shin Kaneko laboratory reports a method that solves this problem.

This past October, Kyoto University Professor Tasuku Honjo won the Nobel Prize for his discovery of how cancer cells evade the immune system. His findings have been the basis for new cancer immunotherapies. Last year, the U.S. caused a fervor by approving CAR (chimeric antigen receptor) T cell therapies, which other countries have also approved this year. This therapy's effectiveness is unprecedented, but so too is the cost at nearly half a million dollars. Kaneko is using cell reprogramming technology to make cancer immunotherapies like CAR T cells more affordable.

"iPS cells can produce a large number of T cells. We are researching how to produce T cells that target specific cancers," Kaneko says.

To recognize cancer cells, T cells express on their surface receptors. The receptor is specific for a certain type of antigen. If the cancer expresses this antigen, then the T cell will bind and destroy it, but the same will happen to any other cell that expresses the same antigen. Therefore, T cell receptors (TCR) undergo a series of rearrangements that assure the T cell does not bind to the antigens of healthy cells before being released into the immune system.

iPS cells can be made by reprogramming any cell type in the body, but Kaneko hypothesized that reprogramming T cells from the patient is best.

"Some patient T cells express antigen-specific TCR for the cancer. Therefore, if we reprogram them to iPS cells and differentiate them back to T cells, they should retain the antigen specificity," he says.

One of the problems using patient T cells for a cancer immunotherapy is that not enough T cells can be acquired for effective treatment. iPS cells on the other hand can be significantly increased to clinically viable numbers.

However, the study found that even this approach resulted in some TCR rearrangement during the differentiation of the iPS cells to T cells, jeopardizing the antigen specificity. This problem could be resolved by knocking out a specific gene that contributes to the rearrangement.

Minagawa injected T cells made from RAG2-deleted iPS cells into mice and found the cells to kill only cancer cells.

Current clinical trials on cancer immunotherapies have used the patient's own cells. However, Kaneko believes the iPS Cell Stock for Regenerative Medicine could lower costs significantly, which is why the study also looked at iPS cells from the stock as an alternative source for T cell immunotherapies.

"The stock stores clinical grade iPS cells, so we only need to do the differentiation, not the reprogramming. The cells are an off-the-shelf product that can be used to treat many patients," he says.

When using the patient's own T cells to prepare iPS cells, the antigen specificity must be preserved. However, iPS cells in the stock were not made from T cells, meaning that the antigen specificity must be added during the differentiation process, not preserved. Here, the researchers added the appropriate receptors to the iPS cells using a lentivirus system.

Kaneko explains that which approach is best will depend on the circumstance.

"The stock approach is cheaper and faster treatment and could be useful for a large number of patients, but the patient's own T cells are always safest because of graft versus host alloreactivity," he says.