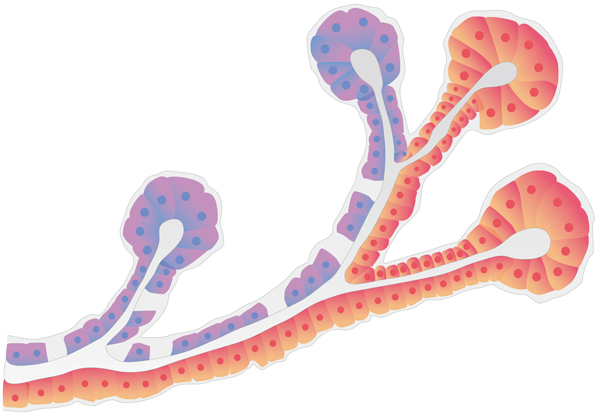 The expression of TFF2 in exocrine tissue correlated with the survival of insulin-producing cells in endocrine tissue.

A new study by the Yoshiya Kawaguchi laboratory reports TFF2 as a key factor that regulates the development of the endocrine pancreas, which is responsible for insulin production.

"These observations suggested the existence of factors in exocrine tissue that regulate development and function of endocrine tissue," he explains.

A more detailed analysis in a new report found Trefoil factor 2 (TFF2) is expressed only in the exocrine pancreas and is significantly suppressed in mice with Pdx1 knocked out. This difference held during the development of the pancreas and in adult pancreas. Accordingly, the mutant mice showed a depleted number of endocrine progenitor cells and insulin-secreting cells.

Additional experiments showed that TFF2 functions to prevent the cells from dying.

"We could obtain more insulin-secreting cells if we added TFF2 to the Pdx1 knockout pancreas in culture. We found a CXCR4 inhibitor prevented this increase," notes Ph.D. student and pancreatic surgeon Dr. Koji Hirata, who first-authored the study.

TFF2 was first identified in the pancreas in 1982, but has since been found in many other tissues. CXCR4, on the other hand, is a well-studied receptor that is responsible for cell migration, including the migration of blood cells and cancer cells.

Because diabetes is associated with the endocrine tissue, studies have focused on the establishment of abnormalities in this tissue. Connections between exocrine and endocrine tissues, such as TFF2, indicate that a wider net is needed when studying this disease.