Stopping the cycle for DNA repair 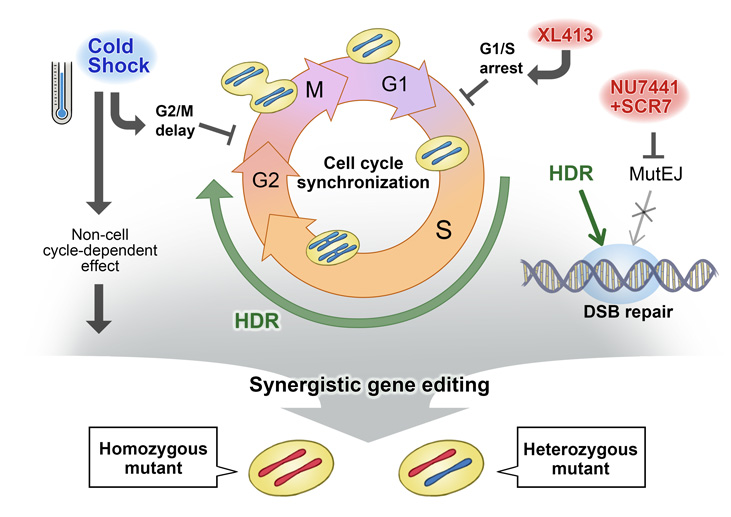 By pausing the cell cycle with hypothermia or chemicals, the Woltjen laboratory improves precision genome editing.

New genome editing technologies such as CRISPR-Cas9 have made it easier than ever to generate designer mutations. However, designer mutations that do not change the DNA length, which are necessary to model many diseases, remain a challenge. CiRA graduate student Thomas Maurissen and Associate Professor Knut Woltjen show in a new study published by Nature Communications how modulating the cell cycle with chemicals or temperature can favour desired genome editing outcomes in induced pluripotent stem (iPS) cells.

Despite its importance to life, DNA is surprisingly fragile. In order to protect DNA, cells have developed DNA repair machinery including non-homologous end joining, which is rapid but error-prone, and homology-directed repair, which provides more precise correction. In genome editing, scientists exploit this machinery to modify DNA damaged by CRISPR at a pre-defined site.

"Among the two DNA repair systems, non-homologous end joining is easier to elicit and can disrupt genes by randomly adding or subtracting DNA bases. Homology-directed repair on the other hand is a rare event, yet it allows us to edit DNA in a pre-determined manner," explains Woltjen.

One reason for non-homologous end joining bias is the activity of the two processes during the cell cycle. Homology-directed repair depends on DNA replication to generate a DNA copy that is used as a template during the repair process. Thus, within the cell cycle, homology-directed repair is active for only a small portion, unlike non-homologous end joining, which is active throughout.

Looking for ways to change this bias, the two scientists found that exposing the cells to hypothermia for two days immediately after introducing the CRISPR-Cas9 system, they could enhance the proportion of homology-directed repairs.

"We observed slower growth and increased homology-directed repair when slightly reducing the temperature of cells in culture. We hypothesized that hypothermia could stop the cell cycle at a time when homology-directed repair is favoured," says Thomas Maurissen, who will earn his Ph.D. from the study. "We think additional effects of hypothermia independent of the cell cycle might be contributing as well".

"We found all our genome edits were homozygous. The number of heterozygous changes was practically zero," recalls Maurissen.

All human genes take one allele from the mother and one from the father. If an edit changes only one allele, it leads to a heterozygous mutation, and if it changes both, it results in a homozygous mutation. In dominant or multifactorial diseases, a mutation may be heterozygous, affecting only one allele. Thus, in efforts to create disease models with homology-directed repair, there is the risk of changing the other allele as well.

"We realized that to acquire heterozygous mutations, we had to protect one of the alleles from the CRISPR-Cas9 system. We did this by using a second DNA template with a silent mutation, which blocks the allele from further attack by CRISPR, but does not cause disease," says Woltjen.

To test this assertion, the two scientists used combinations of DNA templates to edit various genes. They found that using pairs of templates together with the hypothermia or the chemical inhibitors described above resulted in a larger fraction of gene edits being heterozygous, with one mutant and one protected allele.

As a basic researcher, Woltjen is excited about the prospects of controlling DNA repair. However, the impact on medicine and future therapies is not lost on him.

"Understanding how to control the cell cycle to promote certain types of DNA repair systems will facilitate the generation of both dominant and recessive genetic disease models," he says.