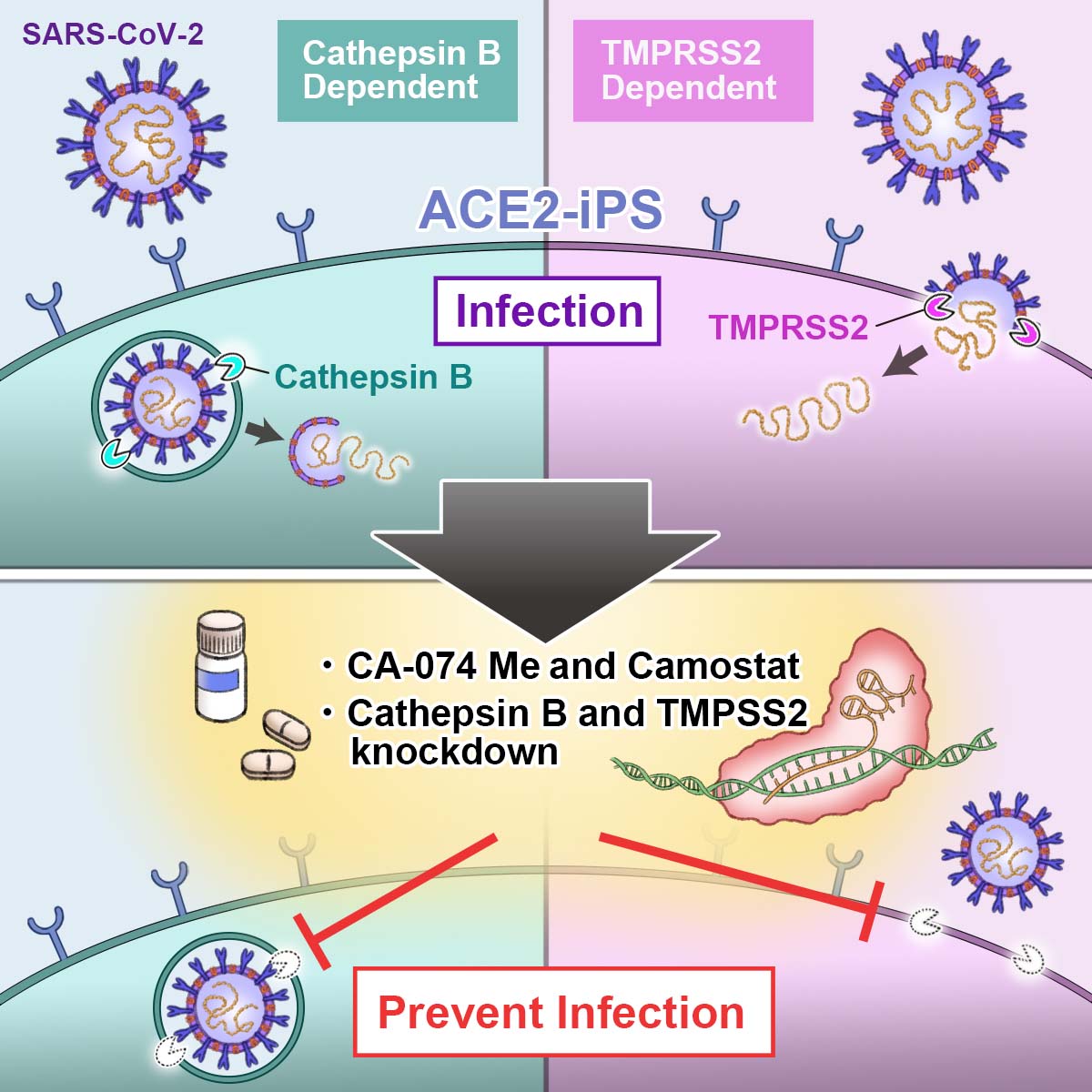 The COVID-19 vaccine is just one example of the rapid and global effort to stopping the pandemic. Drugs too are being developed. A new study by CiRA researchers shows that the combination of two drugs halts the infection of SARS-CoV-2, the virus responsible for COVID-19, in iPS cells.

The influence of the COVID-19 pandemic can be seen in almost all industries. Chain supplies are suffering worldwide, and companies everywhere are adjusting to having their employees work from home. Science has been affected in many ways too. The urgency of the pandemic has forced many scientists to shift their research to preventing the infection of the SARS-CoV-2 virus.

CiRA as a whole has diverted massive resources to the problem, because iPS cells offer an attractive model to study the infection for several reasons.

"We can differentiate iPS cells into any cell type we want to study. We can acquire iPS cells from mild and severe COVID-19 patients," said CiRA Junior Associate Professor Kazuo Takayama about some of the benefits of these cells.

iPS cells are also ideal for gene editing. Since the pandemic started, scientists have discovered a series of genes in human cells that enable SARS-CoV-2 infection. One of the most important is TMPRSS2, which codes for transmembrane serine protease 2. Another is CTSB, which codes for cathepsin B, another type of protease. These proteases cleave the spike protein of SARS-CoV-2, allowing the virus to enter the cell.

In the study, these two genes were edited so that the cell did not produce the proteases. This significantly attenuated the infection of iPS cells by SARS-CoV-2. Using this information, the researchers tested two drugs, CA-074, which inhibits cathepsin B, and Camostat, which inhibits transmembrane serine protease 2, showing their combination reduced the viral load to less than 0.01% of that without drug treatment.

"Our findings suggest a clear synergistic effect by inhibiting both proteases," said Takayama. "We found this effect for several SARS-CoV-2 variants."

This synergy could reflect the different locations of the proteases in the cell. Cathespin B is found in endosomes, while TMPRSS2 is found in the cell membrane. Endosomes are molecules to be transported from one location to another in a cell, while proteins in the membrane can move around but only on the membrane and exchange items from the inside and outside of the cell.

However, Takayama cautions that iPS cells do not exist in patients and that more study is needed to confirm the effect of the drug combination in patient care.

"We need to see if the same effects are found in differentiated iPS cells," he said.