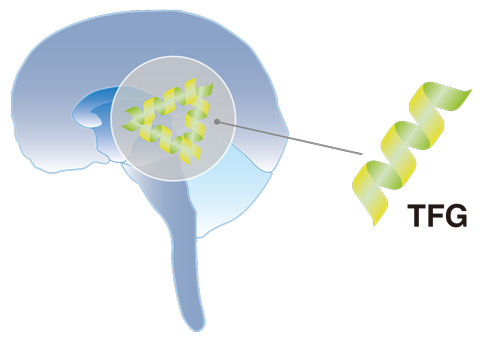 In HMSN-P patients, a mutation in the TFG gene causes the protein to accumulate.

Hereditary motor and sensory neuropathy with proximal dominant involvement (HMSN-P) disease is caused by a single mutation in the TFG gene. HMSN-P patients gradually suffer muscle atrophy and eventually die of respiratory failure. To understand the molecular effects of the TFG mutation, CiRA Professor Haruhisa Inoue and his team prepared iPS cells from the somatic cells of HMSN-P patients to show a dysfunctional ubiquitin proteosome system (UPS) as the culprit.

HMSN-P was first reported 20 years ago in patients from Okinawa prefecture, the southern islands of Japan. Like other neurodegenerative diseases, such as ALS and Alzheimer's disease, HMSN-P is marked by an aggregation of proteins, in this case the TFG protein. Because protein disposal is the responsibility of the UPS, it has been assumed the UPS fails in HMSN-P patients.

To investigate the TFG mutation and the UPS in patient neurons, CiRA scientists reprogrammed somatic cells from two HMSN-P patients with the same TFG mutation and from three healthy volunteers to iPS cells, which were then differentiated to spinal motor neurons. The patient iPS cell-derived motor neurons showed an accumulation of TFG protein and lower UPS activity.

The risk of UPS abnormalities increases with age, which may explain why HMSN-P is an adult disease. Adding a UPS inhibitor to the neurons, which mimics aging, significantly reduced the number of surviving patient iPS cell-derived neurons.

These findings alone, however, do not show a direct link between TFG mutation and HMSN-P. CiRA scientists therefore used CRISPR-Cas9 gene editing technology to correct the mutation. The correction ameliorated the UPS activity and UPS inhibitor had no effect on cell survival after gene correction.

Based on these observations, the investigators concluded that the mutation impairs the UPS, although how remains a question.