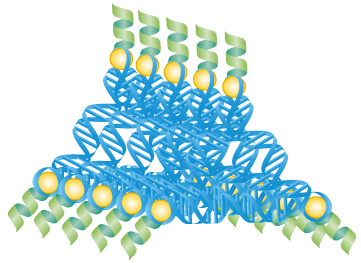 The Hirohide Saito lab has constructed geometrical shapes out of RNA that assemble proteins and kill unwanted cells.

RNA is an essential molecule for the conversion of genes to proteins. It is also a very useful molecule to make various nano-sized shapes. These RNA architectures in turn can be used to detect, assemble, and activate proteins that have very specific effects on a cell, such as programmed cell death.

"RNA is made up of four ribonucleotide bases: adenosine, guanine, cytosine, and uracil. This makes the RNA structure easy to engineer and is why I use RNA to make nanosized structures," said CiRA Professor Hirohide Saito.

Regardless of how much protein is in the cell, to function properly, many proteins must assemble into complexes with other proteins or nucleic acids like RNA. Therefore, to optimally control a protein inside a cell, bioengineers like Saito aim to not only control gene expression, but also the localization and assembly of proteins.

"Caspase-8 is an apoptosis protein that kills cells, but only when it oligomerizes," he said.

Because of its apoptotic nature, Saito wondered if he could control caspase-8 oligomerization by structured RNA to kill off undesired cells such as cancer cells.

His lab prepared nano-sized RNA scaffolds that can attach and assemble caspase-8 through RNA-binding proteins (RBPs).

L7Ae has been the preferred RBP in the Saito lab for nearly a decade. Using prediction software, Saito has shown that L7Ae can force desired angles in RNA, which allows for the creation of different shapes.

Tomonori Shibata, a researcher in the lab, used L7Ae to construct multiple caspase-8-spiked assemblies inside HeLa cells, a type of cancer cell commonly used in laboratories to test new biotechnology.

Because L7Ae is not expressed in human cells, the L7Ae-caspase 8 system will kill all cells with equal efficiency. To make the system specific, Shibata and Saito considered other RBP-RNA combinations.

"Switching the RBP to a protein that is high in only target cells allows us to control cell fate selectively," said Saito.

Shibata demonstrated this point by switching L7Ae to LIN28A, which is expressed highly in induced pluripotent stem cells (iPSCs) but not in HeLa cells. He then bound caspase-8 to LIN28A (LIN28A-caspase-8) and transfected the complex along with RNA that has high affinity for LIN28A into iPSCs and HeLa cells. In HeLa cells, the interaction between LIN28A-caspase-8 and this synthetic RNA forms a nanostructure that activates caspase-8, killing most of the cells. In contrast, because the endogenous LIN28A in iPSCs can compete with LIN28A-caspase-8 for the binding to synthetic RNA, a far higher number of iPSCs could survive.

Saito stresses that it is the selectivity of his RNA nanotechnology that makes it a potentially powerful tool in synthetic biology.

"In any therapy, we want to target the diseased cells without damaging healthy ones. Our RNA nanotechnology may be refined for this targeting," he said.