Cheap production of liver cells for disease study and treatment 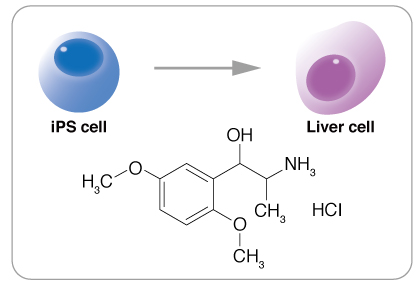 The differentiation of iPS cells to hepatocyte-like cells can be done with expensive growth factors. CiRA researchers show using methoxamine hydrochloride (chemical structure is shown) instead has the same differentiation efficiency but at lower cost.

CiRA scientists report a low-cost protocol for the production of hepatocytes from iPS cells for affordable study of liver disease and therapies.

The only effective cure for chronic liver disease is liver transplantation, the first of which in modern medicine dates back more than 50 years. However, the lack of available donors leaves the majority of patients in need of a liver transplantation unserved. Furthermore, even though new technologies now allow for portions of a liver from a living donor to be used, the operation puts the donor at risk, which discourages potential donors from coming forward. As an alternative to liver transplantation, CiRA Professor Kenji Osafune is using iPS cells to prepare liver cells, or hepatocytes, as a way to study and treat liver disease. In a new study published in Scientific Reports, his lab reports a protocol that uses cheap chemicals to lower the cost of the preparation.

One factor holding back new cell therapies is limited understanding of how to convert iPS cells into hepatocytes.

"We try to mimic the development process of liver. We induce each stage of development with certain growth factors," said Osafune.

The problem with growth factors is that they are expensive and difficult to standardize for clinical use. Osafune hypothesized that because they are cheaper and easier to manufacture, drugs and other chemical compounds are preferred for differentiating iPS cells into hepatocytes.

CiRA scientists screened a drug library of over 1,000 compounds and found one compound, methoxamine hydrochloride, has a positive effect on the differentiation of iPS cells to hepatocytes. In fact, the efficiency of the differentiation to hepatocytes using methoxamine hydrochloride was equal to that using expensive growth factors.

"We found that methoxamine hydrochloride binds to α1-adrenergic receptors and activates STAT3 signaling to promote the generation of hepatocytes," said Dr. Maki Kotaka, the first author of the paper who conducted the experiments.

Osafune expects the study to clarify how the liver forms at smaller expense.

"Detailed understanding of the signals that differentiate iPS cells to hepatocytes will help us produce cells at higher efficiency for future cell therapies. We think our method can lower costs significantly," said Osafune.