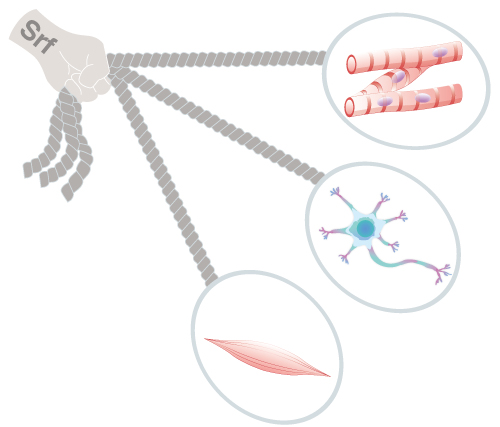 The expression of Srf1 disrupts the identity of various types of cells.

The expression of Srf1 disrupts the identity
of various types of cells.

CiRA researchers show serum response factor (Srf) facilitates cell reprogramming into iPS cells by repressing the expression of genes responsible for cell identity. The discovery provides new insights on the nuclear events that must occur for cell reprogramming and also suggests the possible role Srf could have in diseases such as cancer.

"The maintenance of cell identity is crucial for health, and its loss is associated with aging and cancer. Roadblocks are factors that maintain cell identity and block reprogramming," he said.

Okita and his CiRA colleague, Dr. Takashi Ikeda, both experts in reprogramming, considered if there are any universal factors that suppress roadblocks regardless of the cell type. In the new study, they and colleagues show that serum response factor (Srf) compromises the identity of several different types of mouse cells, including neural progenitor cells, hepatoblasts and uretic bud cells.

Srf responds to mechanical signals in the cell, like changes in cell shape, to activate the expression of other genes. As a result, it has a very important role in embryo development, as the embryo undergoes constant physical change to grow into a fully formed body, and also in adult cells like muscle.

β-actin is a fundamental molecule for cell morphology. Ikeda found that changes in Actb expression led to changes in Srf activation. Srf consequently bound to roadblock genes through its MADS-box domain, suppressing their expression and thus compromising cell identity. This compromise then made the cell susceptible to being reprogrammed to the pluripotent state, i.e. iPS cells.

The study further shows the nuclear effects of Srf binding to a gene. The binding decreased the levels of H3K27ac, a chromatin modifier that enhances gene transcription, on roadblock genes. The genes were physically displaced from the interior of the nucleus to the periphery. Interestingly, in terms of reprogramming, this effect was exclusive to roadblock genes, as Srf did not show a propensity to enhance the expression of genes responsible for pluripotency.

The scientists also found that Srf activation could have pathological repercussions. Overexpressing Srf in mice led to inflammatory conditions such as colitis and also evidence of metaplasia and dysplasia, which are symptoms associated with cancer. This is not a great surprise, since roadblock genes keep the cell state constant, and reprogramming involves the activation of oncogenic genes in order to convert the cell into one that is pluripotent.

Based on the all the above, Ikeda explained that Srf could be a common factor in diseases associated with cells behaving unstably.

"During early development, cells undergo many changes. But in the adult body these changes must stop so that each cell type carries its function. In many diseases, cell function is compromised. Srf misactivation could be a cause," he said.