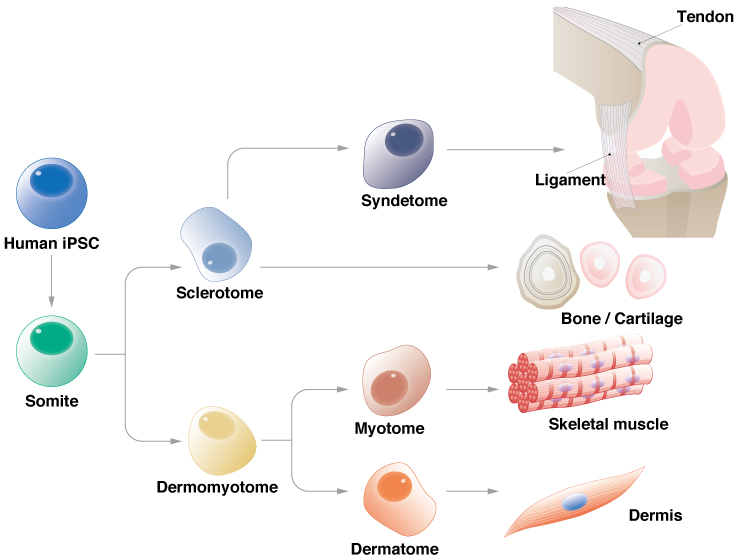 Somite made from human iPS cells recapitulate the developmental potential of somite in the human embryo.

The generation of the somite from human iPS cells indicates these cells can be used to recapitulate normal development of the embryo.

CiRA researchers have reported the generation of human iPS cells into the somite, an embryonic structure that is believed to be the origin of muscle, bone and other tissues. The study shows that human iPS cells can differentiate into somite that shows the same developmental properties as somite from human embryo. Using their iPS cell-somite, the scientists go on to model fibrodysplasia ossficans progressiva (FOP), an extremely rare disease that causes extraordinary bone mass.

During human development, the embryo quickly partitions into distinctive layers that eventually leads to a fully-grown body. While human iPS cells can be used to make almost all the cell types of the human body, certain intermediate stages during embryo development have not been achieved, leaving doubt on whether iPS cells follow the same path as the embryo during development.

"The somite makes repeated structure likes the ribs and the spine. For our body plan, the somite is quite important," says CiRA Associate Professor Makoto Ikeya.

Researchers have reported somite-like structures from human iPS cells before. However, the somite takes four distinctive intermediates before generating the final cell type, and scientists have only managed to produce two.

"The somite gives rise to sclerotome, myotome, dermatome and syndetome. No one has made dermatome or syndetome from pluripotent stem cells," says Taiki Nakajima, who first-authored the study.

"This is strong evidence that iPS cells can be used to model embryo development," said Nakajima.

To demonstrate the application of their iPS cell-somite to disease, the researchers turned their attention to fibrodysplasia ossficans progressiva, an extremely rare disease in which soft tissue like tendon turns to bone.

They prepared iPSC-somites from FOP patients and then made sclerotome, but did not find any characteristics consistent of the disease. However, adult stem cells made from patient iPS cell-somite did.

"The disease appears in late childhood or early adulthood. Because sclerotome is embryonic and because patients show no or little abnormality in their bone and cartilage at birth, it is natural that sclerotome from our somites did not show the disease phenotype. Capturing the disease phenotype with mesenchymal stem cells shows that our iPS cell-somite can be used to model disease," said Ikeya.