Genetically-modified cells to lower the cost of blood therapies 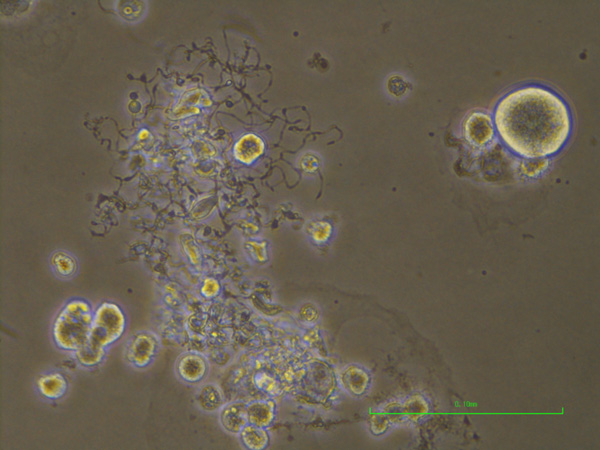 A microscopic image of megakaryocytes. Megakaryocytes are the large circular cells. The protrusions are fragments shredded by blood flow to produce platelets.

Scientists at CiRA use iPS cells to design a genetically-modified megakaryocyte that can be used to find cheap drugs for the manufacturing of platelets in the lab.

One of the biggest anticipations in iPS cell applications is the creation of artificial platelets. Platelets are responsible for forming blood clots and there is evidence that they have some regenerative properties. Current platelet therapies depend on blood donors, but the nature of platelets means the donated cells are disposed if not used within a few days.

CiRA Professor Koji Eto has been using iPS cell technology to minimize this waste, but the current method is too costly to become an alternative to the current donor system. In the latest report from his laboratory, his research team describes a genetically-modified cell to identify drugs that should lower the cost of his strategy.

"Megakaryocytes in the lab are generally smaller and less mature than those in the body. We are looking for chemicals and drugs that can enhance the maturity," says Eto.

While simply looking under a microscope is an easy way to measure the effect of a drug on megakaryocyte size, this approach cannot be done timely when investigating thousands of drugs. High-throughput drug screening was designed for just this purpose.

"We genetically modified β1-tubulin so that it expresses a fluorescent signal when expressed. The bigger the signal, the bigger the cell," explains Dr. Si Jing Chen, one of the authors of the study.

In high throughput screening, users measure the effect of a drug by measuring a fluorescent signal from the cell. The researchers chose β1-tubulin, because it acts as what Chen calls the skeleton of the megakaryocyte.

"α4-tubulin and β1-tubulin are the main cytoskeletal components of the enlarged and elongated cytoplasm seen in mature megakaryocytes," she says.

Using these modified cells in the high throughput screening led to the discovery of compounds that had a positive effect on megakaryocyte size and platelet count.

"We found two drugs, one a WNT inhibitor and the other a FLT3 inhibitor. Some WNT and FLT3 inhibitors are employed in clinical therapies where thrombocytopenia exists," she continues.

To confirm these effects also occurred in the body, the scientists injected each candidate drug into mice suffering from temporarily low platelet count, finding the drugs accelerated recovery of platelet numbers.

The lab is now investigating the effects of these compounds in the generation of platelets for patient care.

"The platelets we make from our megakaryocytes function like natural platelets. Our challenge is to lower the cost so that our method is preferred," says Eto.