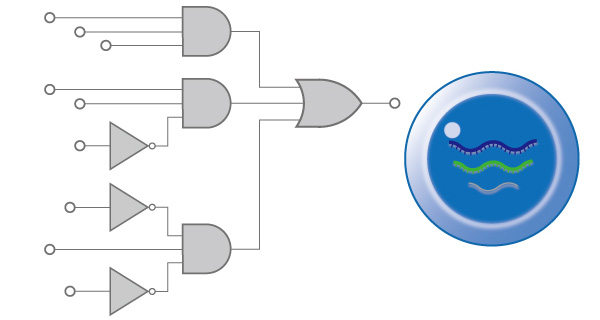 RNA-based logic gates turn different genes on and off in a cell.

Cell reprogramming depends on controlling how a cell expresses its genes. With this capability, researchers can change a cell's behavior from one cell type to another, including the possibility of changing a diseased or cancer cell into a healthy one. While cell reprogramming proves it is possible to control the expression, safer and more effective methods to control cell fate are desired. In a new study in Nature Communications, CiRA researchers report RNA logic gates for this purpose.

Analogous to robots being a collection of electronic circuits, some engineers view the human body as a collection of gene circuits. Turning on one set of genes makes eyes blue and another set makes hair curly. Following this analogy, Professor Hirohide Saito and his graduate student, Satoshi Matsuura, have been developing RNA circuits to control gene expressions in a cell.

"Our microRNA (miRNA)-responsive, synthetic mRNA [messenger RNA], called 'miRNA switch' turns genes on or off depending on the expression of miRNA in the cell. So far, we have made miRNA switches that have ON and OFF responses. We wanted to assemble these into complex circuits like AND gates, OR gates, etc.," says Saito.

Logic gates are standard in electronics. An AND gate gives an output only if both inputs are received. OR gates give the output if at least one input is received. For example, an AND gate would only give you access to your bank account with your personal identification number and signature, whereas an OR gate would you give access with your personal identification number or signature. Other gates give different output depending on the input.

Scientists have successfully synthesized genetic circuits constituted of logic gates, but these have depended on DNA.

"DNA may integrate with the cell's genome. This risks mutations and other permanent side effects. RNA degrades after a short period. Temporary expression is preferred for gene editing or cell reprogramming," says Matsuura, who conducted the bulk of the experiments.

Our circuits are made of synthetic mRNA that produces RNA binding proteins. The mRNA binds to natural miRNA in the cell. This binding switches translation of the RNA binding protein, changing the protein expression from on to off or vice versa.

"In principle, we can turn on or off any transgenes using miRNA switch," says Saito.

"RNA-delivered circuits have an advantage in terms of safety, which makes them preferable for future therapeutic applications in regenerative medicine," says Saito.