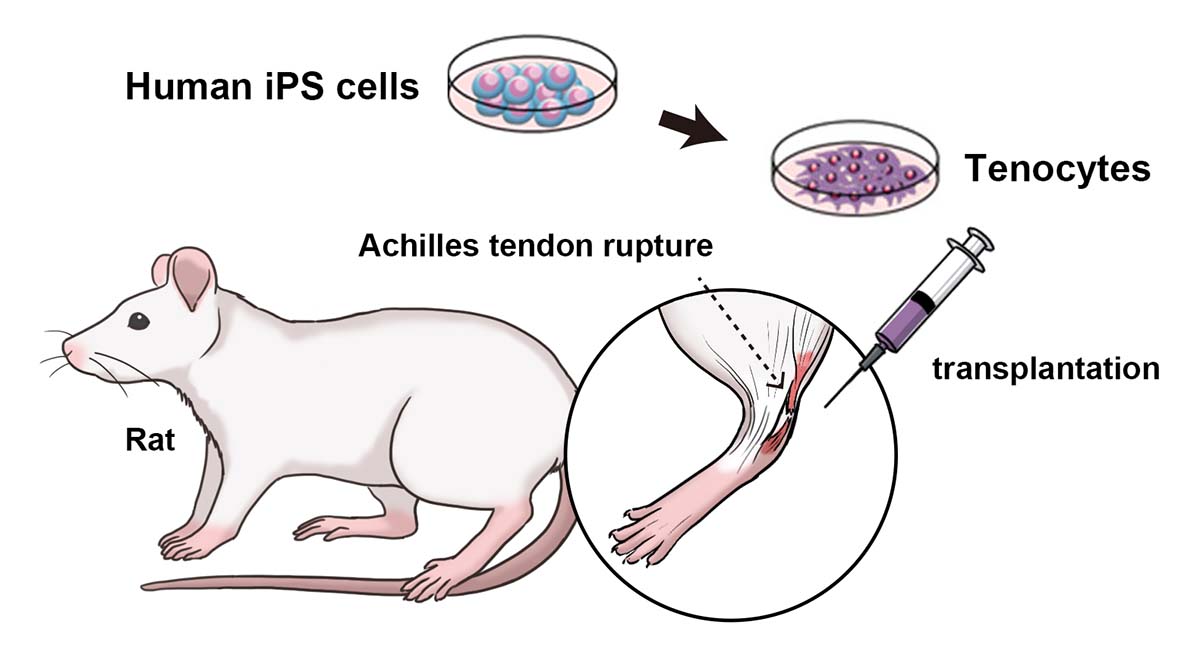 Tendon tears are rarely life-threatening but depending on their severity they demand surgery and a long rehabilitation period. Surgical treatment strategies involve the transplantation of tendon from another part of the patient's body or the injection of donor cells to the torn tendon. While effective, because they depend on the condition of the patient or the quality of the donor cells, patient recovery is quite variable. As an alternative, CiRA researchers report in a new study the benefits of transplanting human iPS cell-derived tenocytes in rats with injured Achilles heels.

It is one of the easiest but devasting injuries to diagnose by the amateur doctor. A world-class athlete is sprinting down the field and suddenly collapses without contact, gripping the back of her ankle in agonizing pain. The sprinter will not be able to leave the field without assistance and unlikely to walk normally again for another three months. Ultimately, the athlete has torn her Achilles tendon.

CiRA Associate Professor Makoto Ikeya says that there are several issues regarding current tendon surgical treatments. Those that involve using undamaged tendon from the patient to repair the tear depends weakens the muscles, thus prolonging the rehabilitation period. The implications can be a delayed return for a professional athlete or more health risks to an immobilized older patient.

As for the transplantation of donor cells, "the cells must be expanded, which diminishes their therapeutic effectiveness. Also, it is hard to control for quality because the donors are different," he said.

iPS cells reduce this concern, because they can be expanded to far large numbers from just one donor. The massive amount can then be differentiated into tenocytes without compromising the therapeutic effects.

The study therefore prepared tenocytes from human iPS cells and transplanted them into rats with torn Achilles heels. While even rats that did not receive the transplantation showed gradual recovery, the recovery appeared significantly earlier in rats that received the cell transplantation. Furthermore, the biomechanical strength of the tendon in the transplanted rats approximated that of uninjured rats.

Admittedly, the researchers expected to find a bigger therapeutic effect, attributing unexpected outcome to a poor engraftment rate. In a cell transplantation therapies, the best therapeutic effect comes from the cells engrafting into the tissue and regenerating. However, engraftment depends on more than just transplanting cells of high quality.

"Part of a good cell transplantation therapy is the delivery of the cells. Our study focused only on the cells themselves. More research is needed to determine the best way to inject them," noted Ikeya.

Considering the low engraftment rate, the researchers examined other factors that promoted the recovery and found paracrine effects. That is, the transplanted cells secreted factors that stimulated the rats' own tenocytes to regenerate.

"We discovered iPS cell-derived tenocytes secreted IGF1- and TGFβ3-related molecules that promoted the proliferation of primary tenocytes," said Dr. Taiki Nakajima, who led the study with Ikeya and is a former member of the Ikeya lab now at Harvard University.

Indeed, simply injecting these chemical factors, both of which are known to promote tenocyte growth and proliferation in natural development, into the injured tendons promoted healing, albeit to a less extent than with the cell transplantation.

While the work is only a preliminary, and experimental cell transplantations for body parts that endure high mechanical stress, like bone, tendons and cartilage must first pass tests on animals that are closer to humans in size, such as pigs, the use of iPS cells to produce tenocytes gives this approach a distinct advantage over other surgical approaches.

"We mimic natural embryonic development to prepare our tenocytes. We believe this gives the tenocytes more regenerative properties than using those taken from adult donors," said Ikeya.